Thatcher: Villain or Hero, Green or not?

Margaret Thatcher was Prime Minister of the UK from 1979 to 1990.  She is remembered by the Left as a villain and by most of the rest of the population as a good Prime Minister.

The case made by the Left is that she devastated British industry, especially coal,  and created mass unemployment.  She also publicly despised the Left.

Did Thatcher devastate British industry?  Coal had been in decline in the UK for decades before 1979. 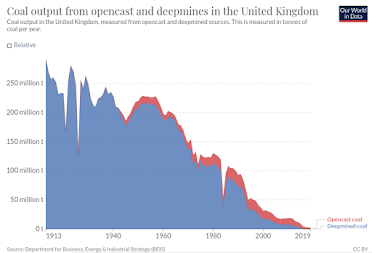 During the 1970s various governments had been held to ransom by miner’s leaders who demanded that either money was diverted from the rest of the economy to coal mining or they would strike and cripple UK energy supplies.  The “Three Day Week” that resulted from the miners strike of 1974 demonstrated that the miners could indeed shut down the economy by striking.

The capitulation of the Governments of the 1970s to the miners caused a steadying of the decline in production of coal but turned the coal industry into a major drain on the UK economy. The plateaus in the loss of mining employment on the graph below represent periods of heavy government subsidy. 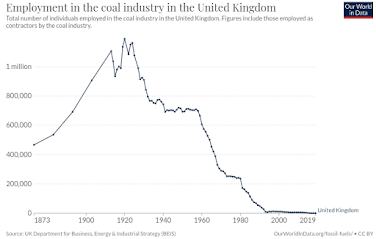 Thatcher confronted the miners in the miner’s strike of 1984.  This time Thatcher had prepared for the confrontation by stockpiling coal and the coal miner’s union was broken as an alternative power in the country.  It is this act of disempowering the far left that created the extreme hatred of Thatcher in the Labour Party and BBC that echoes to this day.

Was Thatcher a hero? No, she was a good Prime Minister.  No country could permit the Soviet inspired Trade Unionism of the 1970s.  It was worse than the Maoist/Postmarxist movements of today and was crippling the country.  Thatcher was a good Prime Minister because she devised a strategy to end this menace and followed it through.  In contrast Edward Heath was a terrible Prime Minister because on 1st January 1974 he “faced the union threat” but failed to prepare in any way for the confrontation and was forced out of office by the miners in March 1974.

Was Thatcher “green”?  In 1984, the same year as the biggest Miner’s strike, Thatcher invited James Lovelock to discuss climate change.  Lovelock had published “Gaia: A New Look at Life on Earth” in 1982.  Thatcher was a qualified scientist and understood that there were serious problems ahead.  No doubt it was the problem of “acid rain” that was the focus of her attention in the early 1980s, coal was the source of this problem and the fact that we no longer hear much about acid rain is a tribute to Thatcher’s work.

Her draft speech to the 1922 committee in 1984 shows how she equated coal with dangerous pollution, it was to begin: “From the dark cloud falls an acid rain that eats into liberty.”

Thatcher’s speech to the Royal Society in 1988 summarises the depth of her comprehension of the depletion of the ozone layer, of global warming and the effect of pollutants.

An excerpt of her Royal Society speech is given below, it is worth reading:

“For generations, we have assumed that the efforts of mankind would leave the fundamental equilibrium of the world’s systems and atmosphere stable. But it is possible that with all these enormous changes (population, agricultural, use of fossil fuels) concentrated into such a short period of time, we have unwittingly begun a massive experiment with the system of this planet itself.

Recently three changes in atmospheric chemistry have become familiar subjects of concern. The first is the increase in the greenhouse gases—carbon dioxide, methane, and chlorofluorocarbons—which has led some to fear that we are creating a global heat trap which could lead to climatic instability. We are told that a warming effect of 1°C per decade would greatly exceed the capacity of our natural habitat to cope. Such warming could cause accelerated melting of glacial ice and a consequent increase in the sea level of several feet over the next century. This was brought home to me at the Commonwealth Conference in Vancouver last year when the President of the Maldive Islands reminded us that the highest part of the Maldives is only six feet above sea level. The population is 177,000. It is noteworthy that the five warmest years in a century of records have all been in the 1980s—though we may not have seen much evidence in Britain!

The second matter under discussion is the discovery by the British Antarctic Survey of a large hole in the ozone layer which protects life from ultra-violet radiation. We don’t know the full implications of the ozone hole nor how it may interact with the greenhouse effect. Nevertheless it was common sense to support a worldwide agreement in Montreal last year to halve world consumption of chlorofluorocarbons by the end of the century. As the sole measure to limit ozone depletion, this may be insufficient but it is a start in reducing the pace of change while we continue the detailed study of the problem on which our (the British) Stratospheric Ozone Review Group is about to report.

The third matter is acid deposition which has affected soils, lakes and trees downwind from industrial centres. Extensive action is being taken to cut down emission of sulphur and nitrogen oxides from power stations at great but necessary expense.

In studying the system of the earth and its atmosphere we have no laboratory in which to carry out controlled experiments. We have to rely on observations of natural systems. We need to identify particular areas of research which will help to establish cause and effect. We need to consider in more detail the likely effects of change within precise timescales. And to consider the wider implications for policy—for energy production, for fuel efficiency, for reforestation. This is no small task, for the annual increase in atmospheric carbon dioxide alone is of the order of three billion tonnes. And half the carbon emitted since the Industrial Revolution remains in the atmosphere. We have an extensive research programme at our meteorological office and we provide one of the world’s four centres for the study of climatic change. We must ensure that what we do is founded on good science to establish cause and effect”

So yes, Thatcher fully understood that coal was not the power source of the future.  She was probably pivotal to the reduction in acid rain and the correction of the hole in the ozone layer and started the international focus on global warming.

It is a pity that we do not have any leader who is prepared to tackle the Postmarxists of today.  Thatcher used strategies such as stockpiling and controlling the unions to save the UK from the Soviets and communism, who will save us from China and Postmarxism by strategically changing UK media and education*?  If this is not done we are doomed to postmodern media reactions such as “Thatcher was evil therefore could not have done anything good” rather than mature analyses.

*The media, especially the BBC, are the coal industry of our modern times, they have enormous power and have been subverted by a political movement, Postmarxism, which is not the public agenda of any of the political parties.  There are strong echoes here of how the Trade Unions of the 1970s were subverted by communists.  Postmarxism is less of a direct economic threat than communism but creates an environment where any debate is immediately reduced to moral outrage at, and no-platforming of, non-Postmarxist opponents.  As a media subversion it is particularly malignant because the media never criticises itself.  The first policy of media Postmarxism is to no-platform any debate about Postmarxism.

This post was originally published by the author on his personal blog: Thatcher: Villain or Hero, Green or not? | Political Thoughts – the magazine (pol-check.blogspot.com)

Dr John Sydenham has worked in International Pharmaceuticals and for one of the "big four" International Consultancies. He ran a successful company for 15 years and after selling the company devotes his time to travel, science, black labradors and freedom.
Previous We must respect Neil Oliver’s freedom to choose or else lose our own
Next The worst thing the SNP can do to you