The Abandonment of Democracy: Have teachers failed society?

The most shocking opinion poll that I read over the past year was by Roberto Stefan Foa and Yascha Mounk in the Journal of Democracy 2016.  It shows that in 2011, only 30% of those aged between 20 and 30 years of age thought that democracy was essential. 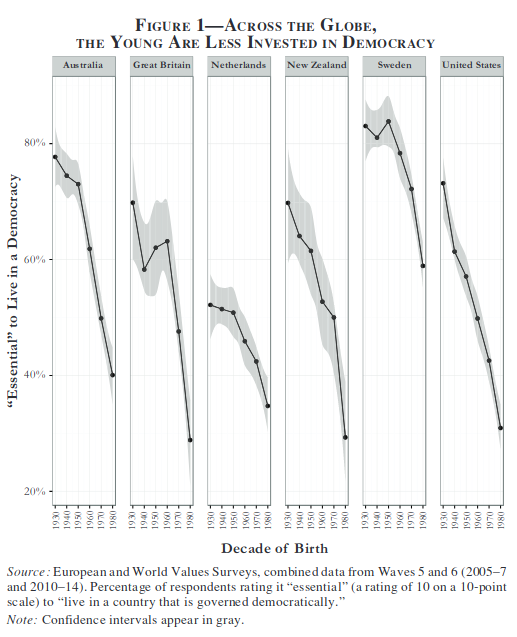 This is depressing but we must not just sit back and accept that it has happened.  We should ask why?  Given that younger voters are the least likely to be interested in politics their attitudes are likely to have been taught, not reasoned.

The bare minimum of democracy is that the People have the power to dismiss their government at intervals.  This is so obviously essential that it is bewildering that it is not taught in schools as a necessary concomitant of a good society.

Many younger voters cannot understand why it would be wrong to be governed from afar or by an authoritarian regime so long as they continue to have material opportunities.  The Anglo-American century has infused the young with an implicit faith that international bodies will be fair.   The fact that the UK and US, who founded and ran these international bodies, were profoundly democratic countries is not seen as the origin of the Global Order, instead it is believed that the simple fact of groups of States working together by its very nature delivers fairness.  When the UN etc. are run by the Chinese we will be able to test the faith in the fairness of Internationalism.  By then it will be too late to save democracy.

This post was originally published by the author on his personal blog: http://pol-check.blogspot.com/2019/11/the-abandonment-of-democracy-have.html

Dr John Sydenham has worked in International Pharmaceuticals and for one of the "big four" International Consultancies. He ran a successful company for 15 years and after selling the company devotes his time to travel, science, black labradors and freedom.
Previous Rainbows
Next An existential threat to the UK