I was inspired to write this article by the excellent milestone of HM the Queen and the Duke of Edinburgh’s Platinum anniversary celebrated this week. Events like this thrill me and reignite my passion for this country and it’s traditions along with Royal weddings, Royal babies, State Openings, and the Christmas address to the nation.

One thing I often hear from Republicans is that the Monarchy should be abolished because the Queen is “unelected”, an uneducated statement as far as I’m concerned. Does the idea of someone being unelected anger you more than what someone actually does with their power? If you abolish the Monarchy you have to elect your Head of State. Every elected Leader in the world divides more people in their nation than Her Majesty does in this country, and the UK knows where it stands with a Monarch. The stats prove this (see below), introduce Presidential elections and we’ll be split into two like most other developed Nations. 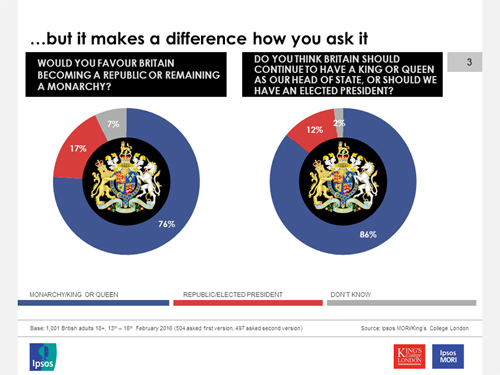 As seen above, not only do British Citizens overwhelmingly support the Monarchy, even more people believe an elected Head of State is a worse idea. Try finding figures like this in a US Presidential election’s popular vote. This is what I find funny about those across the pond (as much as I love them) is that every four years they’ll head to the polls for yet another close race for virtually the same candidate in different colours, one half of the country celebrates, and another cries and protests until it’s time for the sides to alternate next time around. Whereas the majority of Brits want to keep the Monarchy.

I’d even go as far as to say that in Britain, supporting the Monarchy today is actually much more Libertarian than supporting the Presidency. My Head of State can’t launch a nuke, her executive power only exists constitutionally and is never used for personal interest, and Her Majesty won’t give Royal Assent when she feels she’s in the mood for change because the Queen is far above party politics. While politicians fight each other for personal brownie points, a Monarch has been raised their whole life to be responsible in the knowledge that everything they do constitutes the future of the nation and is done for the sake of their subjects and not greed and glory. If the citizens did feel discontent with their King or Queen then it’s well known we’re able to make ourselves heard, that’s what brought an end to the reign of Charles I and made the UK the first country to try Republicanism. Having tried Republicanism, we realised how much of a mistake it was to trust politicians like Cromwell and we restored our Monarchy to put an end to the Statist tyranny of the Puritans- eventually bringing about the Bill of Rights of 1689. Constitutional requirements of the Crown are now to seek the consent of the people and so William III and Mary II ascended the throne declaring the freedoms and rights of their subjects.

“But they cost millions, just so the Queen can re-decorate Buckingham Palace”, goes another falsified statement. Buckingham Palace belongs to the Crown estates, not the Queen. Maybe I can appeal to the left by asking them to interpret the Crown as a nationalised, yet for profit, industry. The Crown estates generate more than they cost to upkeep and maintain because tourism to the UK is our third biggest industry, and let’s be honest no one’s coming here to admire our Gherkin. Tourists come here for Royal babies and Royal weddings which support hotels, restaurants, and stores. I don’t mind if Her Majesty, who in this context practically counts as an employee working 24/7, receives a reasonable portion of the vast wealth of income she’s helped to accumulate for our economy.

But most of all it’s the symbolism of the Monarchy that I prefer. Thanks to the Queen simply existing, we avoid the likes of ‘President Blair’ because politicians are always in the knowledge that there is someone above them regardless of how large their majority in parliament is. Political leaders have to be called upon by someone of higher authority and kneel before the Monarch- having just thought an election gives them a free pass, they are now fully aware that they aren’t just “the Government” they are “Her Majesty’s Government.” Long may she reign!

Adam is a Conservative concerning economic and social issues with a Libertarian streak on civil issues and foreign policy, the latter of which interests him most. From the town of Oldham and currently studying for his LL.B at Manchester Law School with ambitions of achieving a Reserve Commission. Has represented the Daily Globe on RT UK and is open to other inquiries.
Previous On the Tory “mutineers”
Next Good news in Zimbabwe! Now Britain and the Commonwealth must stand ready to help if needed.