The case against George Osborne, Philip Hammond, and the Treasury

This paper considers whether George Osborne, Philip Hammond and senior Treasury officials should be prosecuted for Misconduct in a Public Office.

Prior to the EU Referendum the HM Treasury issued a document called: HM Treasury analysis: the immediate economic impact of leaving the EU.

This document was widely used by campaigners to argue that the EU Referendum itself would cause a disaster for the UK economy in the period between the Referendum and the expiry of the Article 50 notice period.

It was evident subsequently that the predictions in this document for huge unemployment and a dramatic reduction in GDP did not occur.  On Page 57 of the report this shocking graph was shown: 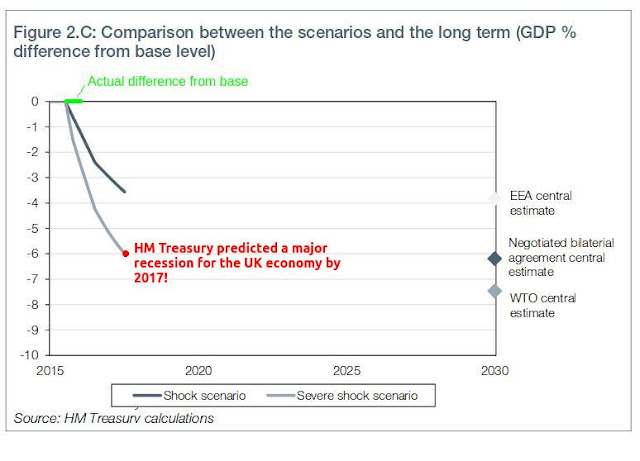 The annotation in coloured type has been added to explain the graph.

The Treasury paper was prefaced with this comment by George Osborne which allows no wriggle room for those who think the forecasts applied to anything other than the immediate post-referendum economy:

No doubt those who produced this document would like us to believe that it was simple incompetence or would point to other, related sources and claim that they made the same “honest” mistake.

The failure of the HM Treasury to apologise for its failed predictions greatly affected the context of the Treasury predictions for “No Deal” produced in 2018, making it seem as if an organisation with a reasonable reputation was involved in the predictions rather than an organisation that had demonstrated huge incompetence or bias or both.

A further question for the Court is whether George Osborne, the Chancellor until July 2016, ordered that the Treasury predictions were produced in good faith or as an exercise to influence the Referendum.  The defence could be raised that other organisations like the IMF had produced similar predictions but it can  be seen that within 6 months the IMF had also gone back on its predictions.

Consider the much publicised IMF predictions. The UK is adopting what the IMF labelled the “Adverse Scenario” but the IMF revised its predictions by January 2017 Brexit will now be fine with GDP growth in the normal range for W.Europe: 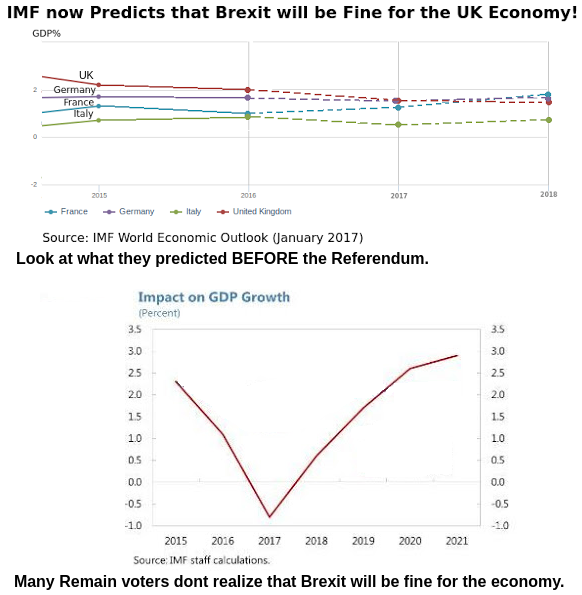 In both the IMF and HM Treasury cases Article 50 had not yet been announced when the predictions for UK GDP were modified back to the normal range for a developed country.  Surely little to do with the underlying “uncertainty” assumptions in the Treasury and IMF models had changed between June 2016 and January 2017 so why did the Treasury and IMF abandon their pre-referendum predictions?  The answer is that organisations such as the IMF cannot retain public confidence if their predictions are massively discrepant from reality.  Those who made the predictions at the IMF knew that their predictions were just imaginary figures designed to help HM Government affect the UK electorate and so abandoned them once their work of affecting the Referendum had been done so that they would not threaten the credibility of the IMF.

The evidence against George Osborne and the Treasury is that their rapid withdrawal from the June 2016 predictions shows that they never believed them in the first place and so used their position to invent an imaginary “Project Fear” with the sole intention of affecting the Referendum.

HM Treasury is implicated in both the misconduct of George Osborne and Philip Hammond.  The defence of “just following orders” is not sufficient to absolve senior Treasury officials of charges of misconduct or gross incompetence.

This post was originally published by the author on his personal blog: http://pol-check.blogspot.com/2019/05/the-case-against-george-osborne-philip.html

Dr John Sydenham has worked in International Pharmaceuticals and for one of the "big four" International Consultancies. He ran a successful company for 15 years and after selling the company devotes his time to travel, science, black labradors and freedom.
Previous Time to ignite the Libertarian Right in the Conservative party
Next An Indyref Romance: Harmony and Dissonance – Chapter 10