The Departure of Theresa May Means Hope for the UK

The departure of Theresa May offers Britain a glimmer of hope in the current constitutional crisis.  I will describe how a pro-independence successor could turn events around.

You may be thinking “how can anyone solve the crisis when No Deal will be a catastrophe?”.  Perhaps you might reconsider this belief.

In 2016 The Treasury and Bank of England made up a story (“Project Fear Mk1”) that said that the UK economy would suffer a dramatic collapse after the Referendum comparable with the worst economic slumps in UK history.  This did not happen.

The Bank of England and Treasury have now made up a similar story about “No Deal Brexit”.   They created a scenario for stress testing banks that included every conceivable cause of slowed growth in the event of No Deal.  Our Media have taken these Bank figures and turned them into “Project Fear Mk2”, describing them as real predictions of what would actually occur if there were a “No Deal” Brexit.

The Bank of England itself says of its work on “No Deal” that it is:

Notice that the Bank of England itself says that its figures for No Deal are NOT FORECASTS FOR THE ECONOMY yet all the Broadcast Media outlets say that a No Deal Brexit would be a catastrophe and show the graphs produced by the Bank of England for extreme stress testing of banks as if they were a factual account of what would happen after No Deal.  This Project Fear Mk2 is even declared to be fake by those who created it but Remain voters are lapping it up.

In fact on page 8 of the bank’s report it is stated that the maximum possible stress of a No Deal Brexit was actually less than assumed in normal Annual Cyclical Stress tests at the bank.  What media outlet had the headline ” worst possible result of No Deal Brexit is in the normal annual range for economic stress testing of banks in the UK economy”?

Have you heard a single BBC, ITV, Sky or Channel 4 interviewer point out to Remainer MPs that No Deal is NOT predicted to be a catastrophe for the economy?  That the Bank and Treasury say in black and white that they do not predict such a thing.

Remain MPs in Parliament voted to ban No Deal on the basis of this imaginary stress test of the banking system.  Banning No Deal means banning Brexit because the EU can just sit on its hands and wait for the UK to withdraw Article 50.  Banning No Deal is simply MPs attempting to overturn the Referendum despite promising to enact Brexit. The Referendum was Independence for the UK versus Project Fear and the electorate voted for Independence so even if Project Fear Mk2 were true MPs must enact Brexit.

Fortunately the power of MPs to intervene in the Article 50 process expired on 29th March 2019. The Institute for Government Legal Advice points out that:

“..the no deal provision in the EU Withdrawal Act 2018 – which would have required the Government to hold a vote in the Commons if no agreement had been reached with the EU by 21 January – has long expired.”

The Government no longer needs Parliamentary approval for a No Deal Brexit.  The UK can leave the EU at any time up to 31st October 2019 when the UK’s Article 50 extension expires.  The Government does not need to consult Parliament and can simply take the UK out of the EU.

A new pro-Brexit Prime Minister will be able to tell the country that the “No Deal” apocalypse that apparently terrifies our MPs is a fantasy.  Even the Bank of England denies that it is a prediction for the economy.  A new Prime Minister will be able to plan a WTO Brexit before October 31st so that the UK can leave the EU.  Even the Bank of England’s ‘predictions’ for a WTO Brexit show that this will be benign for the UK economy: 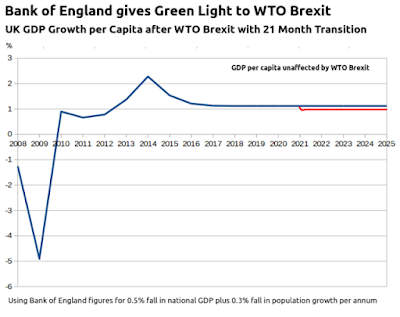 Having left the EU the UK can then finalise a Free Trade Deal with the EU on mutually beneficial terms.

Given that leaving the EU is so simple why has it been so fraught?

After defeat in the 1975 Common Market referendum those against membership accepted the result and campaigned peacefully and constructively for another referendum in a generation or two’s time.  After the 2010, 2015 and 2017 elections Labour accepted that the Tories would be in government and peacefully resolved to hone their policies and message for the next election.  In stable democracies the defeated parties form a loyal opposition that refrains from working to undermine the state and economy simply because it has lost.

After defeat in the 2016 EU Referendum the Remain supporters began by supporting the implementation of the result.  It looked like we could enjoy business as usual but then Gina Miller, who is a Hedge Fund owner and daughter of an Attorney General of Guyana, won a court case to give Parliament the power to intervene in the process of Brexit.  Then George Soros, the Hungarian-American billionaire and servant of the European Movement’s Bilderberg Group, set up the so called “Peoples Vote” campaign to draw Remain MPs away from what 85% had described as their duty to implement Brexit. Finally the Bilderberg Group sent a deputation to demand that Brexit occurred under the penal terms of Theresa May’s Chequers Agreement.

The EU jumped at May’s Withdrawal Agreement.  The EU negotiators celebrated, saying that it would turn the UK into a colony.

See this YouTube clip from the BBC4 Storyville documentary if you do not believe that the EU celebrated: https://www.youtube.com/watch?v=XbR8eFLsR70

So what is happening?  Normally elections and referendums are political and constitutional events where one part of the population attempts to gain the power to implement their policies.  In the 2016 EU Referendum the battle was between those who wanted independence for the UK and Project Fear.  Project Fear was created at the behest of Multinational Companies and Banks who, being dependent on international trade, feared that Independence for the UK might damage their bottom line. The Multinational Companies are not part of the electorate. They do not care that changing the frequency of constitutional referendums from once in a generation to every four years would mean that the Scottish and Northern Irish would have to be given second referendums.  They do not care if the UK is thrown into constitutional crisis or the economy transiently plummets.  They are not a loyal opposition. They are not democrats and they don’t give a fig for the people of Britain.  Heseltine is typical of this class of Corporate Elite traitors:

The Multinationals have control of the UK broadcast Media and have suppressed coverage of the reasons for an Independent UK.  The BBC is an attendee at the secret Bilderberg meetings and is working hand in glove with the Multinationals.  The giant advertising agency WPP can literally call the shots in the private Media sector.  This is why the Multinationals have been able to suppress any proper discussion of their involvement in Brexit and why if we do not achieve independence now we are lost.

This news suppression means that most UK Remain voters do not even realize that the future of the UK is at stake  – see EU Nationalism.

This post was originally published by the author on his personal blog: http://pol-check.blogspot.com/2019/05/the-departure-of-theresa-may-offers.html

Dr John Sydenham has worked in International Pharmaceuticals and for one of the "big four" International Consultancies. He ran a successful company for 15 years and after selling the company devotes his time to travel, science, black labradors and freedom.
Previous A bigger world
Next An Indyref Romance: Harmony and Dissonance – Chapter 9