The EU after Brexit

What has Brexit done to the EU?  The answer is simple, it has accelerated the move towards EU political union where the EU operates as a single state.  This concept is fully supported by Merkel and the new, pro-EU French President, Macron.  The two leaders are in such agreement on this issue that they are nicknamed “Merkron” in the EU.There are 19 members of the Eurozone out of 28 countries in the EU.  The UK is already regarded by EU policymakers as having left the Union so the Eurozone is now the major, unopposed power in the EU (it includes Germany, France, Spain and Italy).  The Eurozone is being renamed the Eurogroup and it is planned that it will operate as a single State by 2025: 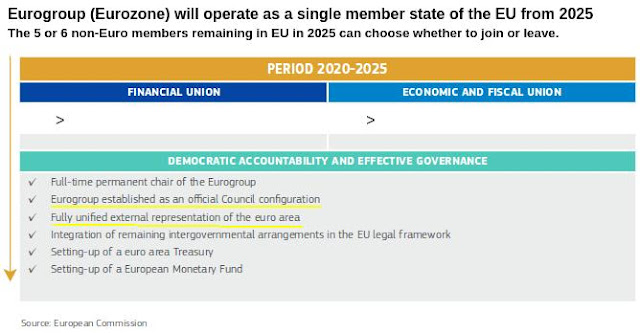 After 2025 the EU will consist of the new country, the Eurogroup, with a handful of satellite Nations such as Denmark.  The individual States within the Eurogroup will have a status similar to the individual States in the United States of America.  The desire to give up sovereignty that exists in most EU countries will have been achieved.This new country will need an army.  The EU Council meeting in June resulted in an agreement for a full EU defence union – see EU Leaders hail historic step in defence cooperation.  This entails over 5 billion Euros pa of funding now, to be followed by the activation of the Permanent Structured Cooperation (PESCO) on Defence.  PESCO was agreed in the Lisbon Treaty but blocked by the UK.  The EU will move towards replacing the various national memberships of NATO with a single Eurogroup membership after 2025 under Article 42 of the EU Treaty.  PESCO really means setting up a European Army. 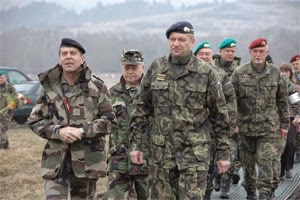 Merkel and Macron have announced that they are preparing a joint policy for increased Union (See France and Germany to make joint proposal for the future of Europe).  This will be presented at the end of September.There can be absolutely no doubt: the EU is headed for full political union with member states operating as regions.  This is critical for the functioning of the Common Market (called the Single Market since 1993) because the new Nation, the EU, will have total control of it after 2025.  “Staying in the Single Market” will be equivalent to handing our economy to the EU, a foreign country with its own interests and imperatives.If you voted Remain in the referendum did you really intend to consign the settled people of the UK, your parents and neighbours, to being in a powerless, homogenized region of another country, the EU?

This post was originally published by the author on his personal blog: http://pol-check.blogspot.com/2017/07/the-eu-after-brexit.html?m=1

Dr John Sydenham has worked in International Pharmaceuticals and for one of the "big four" International Consultancies. He ran a successful company for 15 years and after selling the company devotes his time to travel, science, black labradors and freedom.
Previous Labour’s lies have let down Young People
Next Weekly Globe Episode 10 #podcast