The Euro at 20: Still Destroying Prosperity

In 2019, the European Single Currency turns twenty. Prominent eurocrats have taken to Twitter to celebrate this milestone, simultaneously slapping those in the face who have suffered with stagnant economic growth since the Euro was introduced in 1999.

The main problem with the Euro persists – it is a non-optimal currency zone. When Eurozone countries had free floating currencies, they were able to remain competitive by devaluing them, to attract investment and boost the comparative value of exports. On the other hand, Germany (the continent’s powerhouse) saw its currency appreciate against all other european currencies by significant amounts between 1970 and the inception of the Euro in 1999. 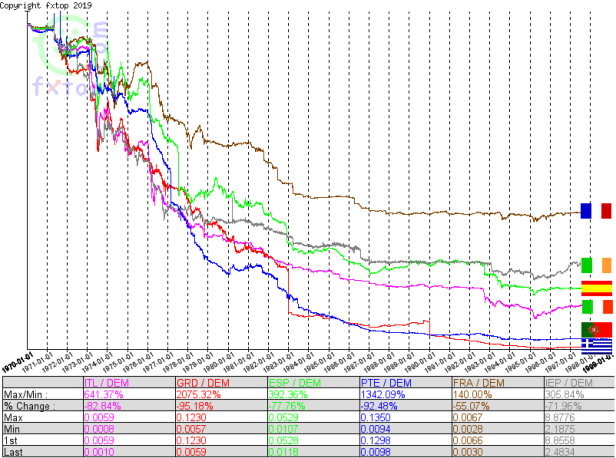 In order to remain competitive, the Italian Lira was devalued against the German Deutsche Mark by over 82% between 1970 and 1999. The French Franc fell by over 55%. The Spanish Peseta depreciated by over 77%, the Irish Pound by over 71%, whilst the Portuguese Escudo and Greek Drachma depreciated by over 92% and 95% respectively.

By devaluing their currencies, the weaker economies in southern Europe were able to produce some stunning growth results, comparable even with Germany. However such devaluations were clear evidence that currency sharing between these nations was sure to bring economic hardship. Since 1999 economic problems have occurred, as Eurozone states have been unable to devalue their currency to remain competitive, and so have seen sharp reductions in their growth rates, despite loose fiscal policies such as low interest rates and high levels of quantitative easing being in place. Many of the southern European countries have also seen an exodus of young workers, and unemployment in these states remain high. 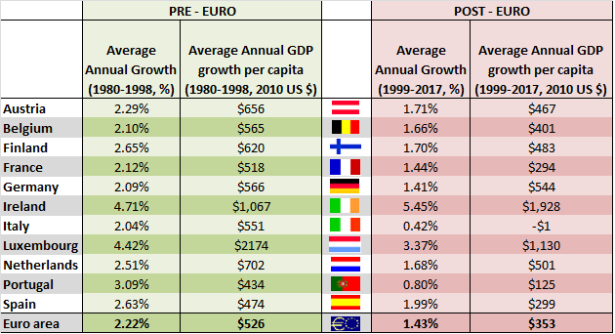 Economic growth data for the eleven founding members of the Eurozone, expressed in average GDP % growth and real-terms GDP currency growth per capita (normalised to 2010 US $). Source: World Bank.

Almost all of the eleven founding Eurozone members have experienced slower growth in the 18 years following the introduction of the Euro, than in the 18 years preceding it. Italy has actually become poorer in real terms since the Euro was introduced. The stand-out exception is Ireland, which has benefited from foreign companies relocating there due to it’s relatively low rate of corporation tax. In 2015, these foreign companies were included in the value of Ireland’s corporate sector, inflating apparent GDP growth for that year to over 25% – somewhat distorting the growth figures.

Including Greece in the figures show what a disaster the single currency has been. Between 1984 – 2000, Greece grew at an average of $310 per capita (2010 US $) every year. Greece then joined the Eurozone in 2001. Between 2001 – 2017, the Greek economy shrunk on average by over $67 per capita every year. Over the same period of time, this is worse than even Iraq (+$78 per capita per year), which was bombed and occupied, and Sub-Saharan Africa (+$29 per capita per year), which has been riven by violence and conflict.

The dysfunction of the Euro as a currency was on full display during European debt crisis, which further hampered European growth. Fiscal transfers allowing distribution of wealth is still not an option, and there is a huge regional imbalance within the Eurozone. Germany runs an export surplus of over 8% of its GDP due to using a weakened Euro as its currency, whilst other nations continue to run deficits, as the Euro is too strong for their economies to be competitive. In 2016, out of the 35 OECD economies at the time, only nine countries had not fully recovered from the 2008 financial crisis, and seven of them were in the Eurozone (Italy, Portugal, Spain, France, Greece, Belgium and The Netherlands). Despite it being over a decade since the financial crisis erupted, the Eurozone remains one of the world’s slowest growing areas, growing at only 0.2% during Q3 of 2018. The United Kingdom, even with the uncertainty of the Brexit process, grew by 0.6%. The USA grew by over 0.8%, whilst the G20 as a whole also grew at a rate of 0.8%.

The Euro is indeed 20 years old, but the boasts from eurocrats that it has brought prosperity and unity is not borne out by the statistics. If the Eurozone is to enjoy considerable growth in the future, then something will have to change.

Joel was born and lives in the United Kingdom, and is a geophysicist working for an oil services company. He blogs in his free time about politics, mainly concerning Brexit. He identifies mainly with conservatism and civic nationalism.
Previous New Year Predictions for 2019
Next The UK’s New Secure Border and What it Means for CANZUK