The front of the queue

One of the best bits from Tim Shipman’s book “All out War” is when he describes David Cameron’s attempt to negotiate some sort of deal with the other EU leaders. The account feels already like another country as if we could look back on those days from a perspective of centuries. But then “the past is foreign country. They do things differently there.” How transient are the political events of a year ago. I had forgotten many of the things that the papers thought at the time were momentous. But then the papers have forgotten them too. Can it really be less than a year ago that Cameron went to Brussels looking for a deal? He might as well have been wearing the clothes of his great grandfather. That world has gone. It is but a dream remembered.

The problem that David Cameron had is that he wanted something and others had to decide whether to give it to him or not. He carefully toured round all the various EU countries. But none of this actually mattered. At every point he had to ask the Germans.  There is an appearance [schein] about the EU, but there is also a reality [sein]. When you have to ask for something, what matters is whether the lady from Berlin says Ja oder nein [yes or no]. The Germans calculated that Britain would not vote to leave the EU and most importantly David Cameron would accept whatever they gave him. So they gave him more or less nothing.

This is the key lesson for our future relations with the EU. Don’t ask for anything. Luckily it looks as if Theresa May has learned it.

No doubt some people at the time realised that Mr Obama himself would be gone by the time the issue arose, but then everyone must have calculated that the president spoke for all future presidents. It was after all long standing US policy to support the EU. Who could have guessed at the time that we would now have a president who likes Britain, who thinks of himself as in part British and Scottish, and who wants to put Britain at the front of the queue? But still some British citizens are complaining and are desperate that we should go to the back. Is this some sort of masochism or is it an inferiority complex? If you suffer from it I suggest you do what you can to get over it.

We all eventually revert to our historical roles. It is for this reason that you should read history. Not to learn from it. No one ever learns from history, but rather to understand where we all are now. Far from being an aberration, Trump is taking the United States back to its natural position. He is reasserting the Monroe Doctrine.

Both Franklin Roosevelt in 1940 and Woodrow Wilson in 1916 promised to keep the USA out of European wars. Wilson even used the slogan “America first”. Of course we all know that it didn’t work out that way. But this just expresses the tension in American history. Do we stick to our own continent or do we get involved? After a long period of interventionism the US is going to go back to its natural position. No doubt it will intervene again, but not yet.

This changes everything. It also provides Britain with an opportunity. Crucially when Theresa May goes to get her deal with the EU she is willing to walk away. We don’t particularly need anything from the EU. Imagine if we were asking for something. We’d then be in the same position as Mr Cameron. Oh please Angela let us stay in the Single Market. Oh please Angela we just won’t be able to get along without your help. Up against 27 other EU states, all of whom would want their pound of flesh, but most of all up against the Kaiserin [empress] or is that Kanzlerin [chancellor], we would once more get nothing. The price of leaving the EU under those circumstances would be to remain in the EU. This of course is what the opponents of Brexit have been hoping for. They wanted it to appear as if the UK left the EU, otherwise the peasants might revolt, but in reality we were to remain.

What we want from the EU is no more than we give. If you give us free trade we will give it back. We will let some of your citizens live and work here if you do the same. This is a prize worth having. But it is not worth being ruled by the Kaiserin.

The UK pays more into the EU than we take out, much more. But more than this, we pay more into the EU than we would pay even if we were to pay tariffs on everything we sell to them. It is this which makes our hand so strong as compared to the hand that most EU countries have. Even if, for example, Poland wanted to leave the EU it couldn’t afford to because it gets a subsidy from the EU.

The same of course goes for Scotland. Even those Scots who dislike the UK have to calculate that leaving would mean giving up the subsidy that the UK gives to Scotland. It is this above all that makes Nicola Sturgeon’s hand so weak. Moreover, if the SNP ever won independence, which would destroy the UK, an SNP leader would still expect to go to London asking for this and that. Please let us keep the pound. Please keep the border open. Please let us have a social union and by the way we want to be best friends. How would you react to someone destroying your country? By contrast the UK doesn’t want to destroy the EU.  We are more than willing to help them achieve whatever goal they seek so long as it doesn’t involve us.

Why would the EU give us a trade deal? They may not. If they don’t it’s their loss. This again is crucial to the negotiations. Some of them want to punish Britain for leaving the EU. Good luck with that? The British people didn’t react terribly favourably to Mr Obama telling us we’d go to the back of the queue. We likewise have a long tradition of telling Europeans that we still have our two fingers. 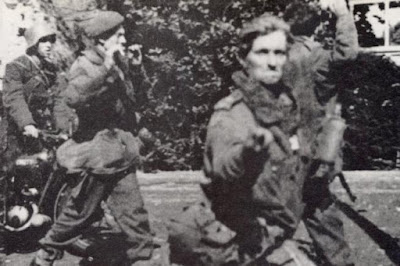 Unfortunately for the EU, if they really tried to punish Britain they would end up punishing themselves. Many EU economies are not doing so well at the moment. Do they really want to sell less to Britain than they do at present? But it is beyond trade where the EU may find that it is in their self-interest to keep Britain as a friend.

Mr Trump is retreating into American isolationism. It’s not clear how much money he is willing to spend on European security. How many serious armed forces are there in Europe? I count three. The French, the British and the Russian. This was ably demonstrated during the war in Yugoslavia. Given the task of defending the population of Srebrenica the Dutch army preferred to surrender without firing a shot. This is not serious. My guess is that a regiment of French legionnaires or British paratroops would have done rather better. By making a stand they might have prevented a massacre occurring at all.

The UK also has the best intelligence service in Europe and we have nuclear weapons. No-one else apart from the French has them. EU security looks like it depends rather crucially on Britain. Implicitly we bring this to the table of negotiations. Why would we be interested in the security of those who do not treat us as friends?

It is perfectly possible to imagine that within a few years we will have more or less free trade with the EU and with countries like Australia and New Zealand. Imagine if we could come up with a trade deal with Australia that meant we could live and work in each other’s countries. My guess is that quite a number of Brits would be attracted to this prospect.

It is this positive story about Britain that we have to tell in order to see off Scottish nationalism. But there is something else as well. Tim Shipman tells a story of a UK Government department getting various edicts from the EU. One of the ministers objects to what he is reading and wants to reject what he thinks is a bad idea. He is firmly told that he can’t. In the end his only task and his only choice is to just sign it.

But what goes for a department in Westminster equally goes for a department in Holyrood. Scottish ministers will find that in areas that are devolved they will have much more power than they did before. No-one in Westminster will tell them what they can or can’t do with regard to any devolved issue, but no-one in Brussels will be able to tell them either. The Scottish Parliament will be more independent than it was before. Also it will be more powerful than it would be if it left the UK and chose to join the EU. Nicola Sturgeon is blind to this. She only wants to complain and threaten. But the prize that awaits Scotland if we all embrace leaving the EU is not only improved trade with the rest of the world, but also more power over our own affairs. It is perhaps for this reason that so many SNP supporters voted for Brexit.

This post was originally published by the author 21 January 2017:  http://effiedeans.blogspot.co.uk/2017/01/the-front-of-queue.html

Effie Deans is a pro UK blogger who works at the University of Aberdeen. She spent many years living in Russia and the Soviet Union, but came home to Scotland so as to enjoy living in a multi-party democracy! When not occupied with Scottish politics she writes fiction and thinks about theology, philosophy and Russian literature.
Previous Burns Night
Next #Brexit- What’s Next?