Is the Internet another “industrial revolution” that is increasing prosperity for all or is it simply a new way of selling goods?

The answer seems to be that Internet sales are displacing purchases from physical stores to online stores: 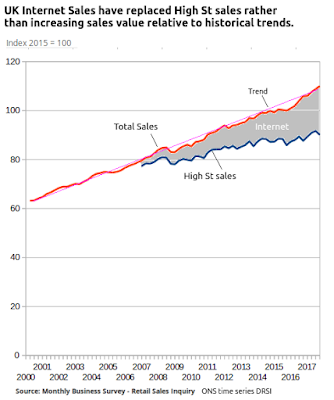 Had the Internet increased the growth in the total value of sales then we should have seen an upward curve in the red line on the graph above.  It seems that the Internet is just another way of selling goods that adds little value.

The Internet is displacing sales from the High Street to online.  This is a choice by Governments which persist in raising as much revenue as possible from the  High Street whilst giving the Internet vendors an easy life.  We saw the hostility of Government to the High Street in the late twentieth century when free parking was encouraged for “out of town” shopping as high rates, high parking fees and parking controls were imposed in the town.  We are now seeing a hostility towards all physical sales venues with high business rates for physical stores and relatively low rates for warehouse operations. The large multinational operators such as Amazon are also given considerable latitude on tax liabilities.

Exactly why our Governments have established such an uneven playing field for retail sales is a mystery.  Perhaps it is simple incompetence.  However we will all regret it when the High Streets have closed down and the towns have lost their centres.  It is also possible that general retail volumes will fall as people realise that staying indoors at home does not require as many clothes and other accessories as going out to shop.

The loss of retail jobs is also becoming an epidemic with 85,000 jobs lost from the retail sector in the first 9 months of 2018.

The most disturbing aspect of favouring Internet Sales is that they allow Multinational vendors to directly import goods and take away profits to other countries.  The EU Single Market expedites this process.  The flippant response to this concern is that UK vendors should learn how to compete.  The considered response is to be disturbed that large, Multinational Corporations have an inherent advantage in international trade and can source product and services from the cheapest sources so that UK wage rates will fall to those in countries that practice Chinese Capitalism or worse forms of government.  Unfortunately the Corporate Elite have the ear of Government and Labour, the supposed party of ordinary people, has been captured by middle class corporate employees since 2016 which leaves the bulk of the People unrepresented.

The Retail Apocalypse is not just affecting the UK.  The USA and Europe have also experienced significant declines in sales and jobs from town and mall based retail outlets.

This post was originally published by the author on his personal blog: http://pol-check.blogspot.com/2018/12/the-internet-vs-high-street-in-uk.html

Dr John Sydenham has worked in International Pharmaceuticals and for one of the "big four" International Consultancies. He ran a successful company for 15 years and after selling the company devotes his time to travel, science, black labradors and freedom.
Previous Why a second EU referendum would be undemocratic
Next 29 March is Britain’s strongest card. MPs working to prevent “No-Deal” are harming Britain