The No Deal predictions

Prior to considering any of the predictions for a No Deal Brexit it is worthwhile to get a sense of perspective about the role of the EU in the UK economy.

In 2016 exports to the EU constituted only 12% of UK GDP. ( See Exports of Goods and Services to EU28 (L84Y), Exports of Goods and Services Total (ikbh). Bear this in mind when you hear estimates of Brexit reducing GDP by 15% or more, they are clearly just trying to scare you.  The UK is not a “great trading nation” nowadays, most UK GDP is generated by the internal economy, not by International Trade.  Several groups of economists (such as Rabobank and HM Treasury) have got so carried away with their negative predictions that they have failed to check whether they still fit with any plausible reality.  Unfortunately journalists have simply accepted what they have said.

The Treasury produced this rather shabby graph to demonstrate how devastating Brexit might be over 15 years: 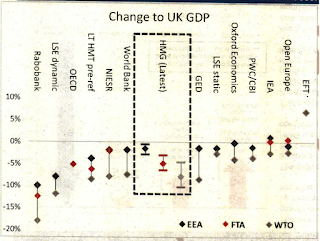 Firstly notice that 6 out of 14 of these predictions show less than 5% reduction in GDP over 15 years.  Why the magic “5%”?  The clue is that many of the predictions are based heavily on reduced migration so that population grows by about 5% less. Fewer people means lower GDP but of course, in the long run we do not get any poorer because the GDP is shared between less of us. Lets explore some of these “economic predictions”.

The Government analysis is so flawed in every direction that it has been dismissed by those independent economists who have investigated its assumptions – see How the economics profession got it wrong on Brexit for a totally independent view of the Treasury forecasts by University of Cambridge economists.  It is breathtaking that analyses such as those produced by the Treasury and Government could have been produced with so little public criticism.

The economics literature uses an estimate of 0.3% reduction in UK National GDP for every 100,000 reduction in migration. (Boubtane et al 2015).  This is the estimate that most economists use although see note 1 for the real figure.  The GDP of developed countries only grows by about 1% per year so by simply making assumptions about migration it is possible to “predict” large changes in GDP growth.  Over 15 years a 0.3% reduction in GDP per annum due to migration adds up to a 5% GDP reduction. There is 5% less money but 5% less people so in truth none of us would be poorer (see Note 1).  Journalists seem to be conspiring with Remain politicians to portray this harmless 5% as a “catastrophe”.

The NIESR Scenarios for Brexit are based almost entirely on their migration model which assumes migration decreases by 100,000 pa.

The Open Europe analysis uses a 1% fall in GDP due to migration which reduces the impact of Brexit under all their scenarios to little different from zero.

The Oxford Group use Boubtane’s view of the effect of migration but do not specify the exact reduction in migration that they expect. We might suppose 100,000 a year and a 5% “impact”.

The PwC (2016) report shown in the Government graph is now discredited because most of its decrease in GDP was due to uncertainty as a result of the Referendum, an effect that never happened.  Without this effect all scenarios of Brexit would be positive according to the original PwC report.

Not wishing to bore readers further I will not go through all of the reports. The simple fact is that Philip Hammond has done more damage to the UK through issuing these fake reports than any other Remainer.  The new Chancellor, Sajid Javid, should immediately disavow them and circulate MPs with a Treasury Report that explains how the House has been misled.

The message to take away is that these economists view increasing the GDP of a country by increasing the number of workers as positive.  The British people see it as negative because it overcrowds us and destroys our country with its beautiful garden landscape and does not increase our individual wealth.

Of course the “No Deal” predictions were absurd from the start because they said they could predict GDP for 15 years hence.  No economist can do this. Few can predict 18 months hence. (See GDP predictions are reliable only in the short term (Economist Dec 15th 2018) ).
If the “predictions” are converted into annual changes we get this graph: 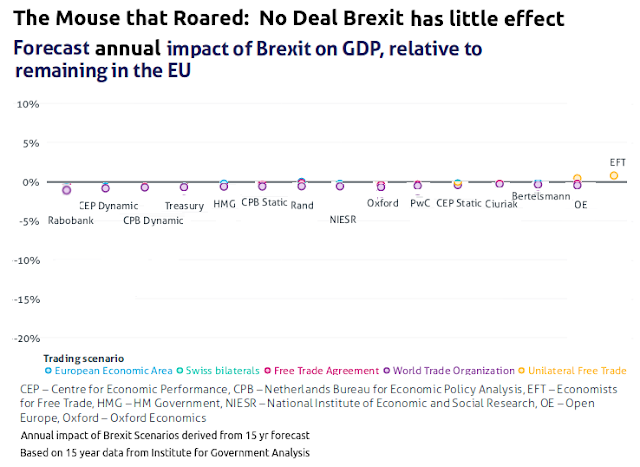 If we add back population effects there is almost no effect at all of No Deal.  You may be shocked by the smallness of these effects but go back to the start of this article to get a sense of perspective, the EU is no big deal, it is being blown out of all proportion.  We are being bamboozled by journalists selling fake news (see Note 2).

Any supporters of independence who are cornered by presenters with the question “which economists say Brexit will be fine?” can answer with confidence that almost all economists believe this once it is realised that the annual effects are tiny and the predictions are over 15 years and no economist can predict for such an interval, furthermore, once population growth is factored in, most economist’s predictions are consistent with No Deal having almost no effect.

The economics literature uses an estimate of 0.3% reduction in National GDP for every 100,000 reduction in migration. (Boubtane et al 2015) and some economists use even higher figures for the effect of migration (See for instance Jaumotte et al 2016).  The actual data, based on the fluctuation of UK GDP with working population due to UK migration is that in recent years migration affects GDP roughly according to each added worker producing a single worker’s amount of extra GDP.  There is little reason to suppose that a 0.15% growth in UK population due to migration (100,000 migrants) will increase GDP by more than about 0.15%, especially in the long term – it is simply obvious that new migrants are not twice as productive as UK resident workers given the large number of migrants who are already here in productivity centres such as London (perhaps 50% of London population).  However, for the purposes of this article it is the 0.3% figure used by economists that is crucial because we are looking at the predictions of economists rather than reality.  The 0.3% figure also allows economists to claim that migration increases productivity.

This post was originally published by the author on his personal blog: http://pol-check.blogspot.com/2019/07/prior-to-considering-any-of-predictions.html

Dr John Sydenham has worked in International Pharmaceuticals and for one of the "big four" International Consultancies. He ran a successful company for 15 years and after selling the company devotes his time to travel, science, black labradors and freedom.
Previous Heart of Oak?
Next The Boris Cabinet