The Report on Racism

The “Report by the Commission on Race and Ethnic Disparities” has just been published.  The Commissioners were nearly all from BAME backgrounds and have produced a robust and fair Report. However, the Report questioned the use of the term “BAME”, among ethnic minorities, 40% said it was still useful, 36% said it was out of date and 25% didn’t know.  BAME is also outdated by demographic changes, for instance, in London the white English are a minority of about 30%, although the Report didn’t raise this point.

The Report identified a class divide in which the cycle of advantage maintains a section of the population in wealth and leaves the large bulk of the population in relative poverty.   The wealthy class is largely white British but the poorer class consists of large numbers of white British and other ethnic groups.  This class divide causes a bias in crude statistics on disadvantage so that majority, poor white British are labelled as “white supremacists” etc. when it is the small wealthy class that actually creates the disparity that causes this analysis.

The most striking finding is that different ethnic groups had very different experiences and outcomes.  Educational outcomes demonstrate this at a glance:

Most ethnic groups had better outcomes than most British children.  The rich white British group have spectacular excellent outcomes because they send their children to private schools.  Within the lower classes the white British do extremely badly.

The median pay gap between ethnic groups is very small when cultural factors such as the proportion of women working is taken into account (the “adjusted” figures below).

The use of “median” figures adjusts for the much higher pay of the white British upper middle classes.  However, this still has a small effect so if the rich white British were removed there would probably be even less difference between UK born ethnic groups.

Ethnic groups are heavily represented in the NHS.  The term “BAME” is wholly inappropriate when considering health workers because nearly half of all doctors come from non-white groups and probably more than 50% of NHS doctors are non-white-British. 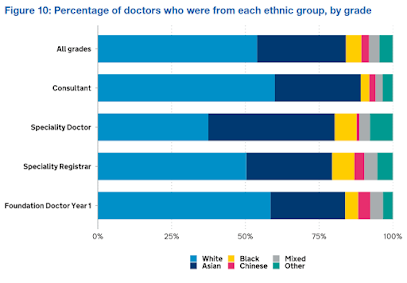 The anomalously high death rate from COVID amongst non-white doctors needs investigating, especially when these are high income individuals. 95% of the doctors who died were non-white, some of whom were running the medical units where they worked. 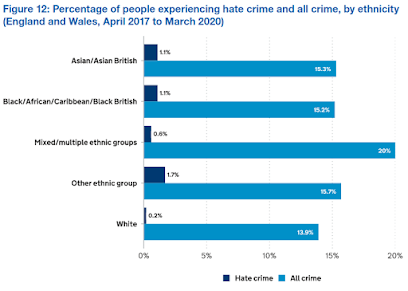 An important contribution of this report was to recognise that ending racism imposes a huge burden on a majority population: “Imagine  a  world  with  just  2  groups  in  which  both  are  equally prejudiced, but the minority forms just 10% of the population. When it comes to hiring, the  potential  prejudice  faced  by  a  minority  applicant  will  be  much  greater  than  the  potential  prejudice  against  an  applicant  from  the  majority.”

The Report has an in-depth analysis of “stop and search” figures by ethnicity.  It considered the fact that stop and search was used to prevent homicides of black people in London (72% of all London homicides). Black people were 4 times more likely to be a victim of violence than White people, and 8 times more likely to be a perpetrator in London. However, the Report concluded that this area of policing needed attention, especially given the effect of this on trust in the police.

The Report made a very important point about the under representation of ethnic minorities in the police force: 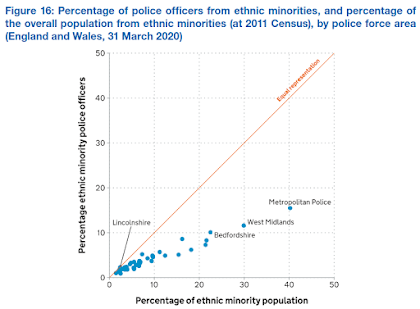 The Report identified a lack of applicants as a particular problem. This would be expected from a largely lower class population.

The section on COVID was interesting, the data suggests that some ethnic groups had ameliorated the factors that caused increased death rates when the second wave hit: 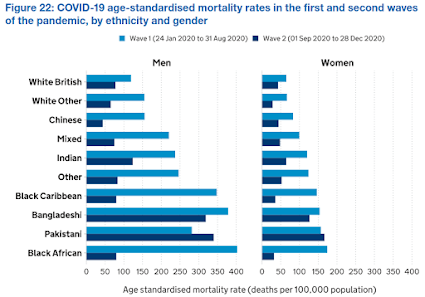 The source of the graph above suggested that it may have been the intensive dissemination of information on COVID by various agencies that caused the fall in mortality.  People were dying of distrust.

Overall this was one of the fairest and most complete reports on racism in the UK that has been published.

Many of the problems that are assigned to racism are actually about class.  It is a tragedy that white middle class “socialists” have been unaware that it is their classism, their rejection of the class war in favour of exploiting racial tensions, is now the cause of much of the racism that remains in the UK.

This post was originally published by the author on his personal blog: https://pol-check.blogspot.com/2021/03/the-report-on-racism.html

Dr John Sydenham has worked in International Pharmaceuticals and for one of the "big four" International Consultancies. He ran a successful company for 15 years and after selling the company devotes his time to travel, science, black labradors and freedom.
Previous Better Education Hinges On Confronting Competency-Based Learning
Next Daily Globe at the Weekend – The CANZUK podcast Episode 6