The Single Market versus a Free Trade Agreement

What should UK trading relations look like after 2019, when Brexit itself finally happens?

We are now being told that the UK must enter the “Single Market “.  The Single Market is, in many ways, another name for being in the EU.  As the EU Commission puts it:

“The Single Market refers to the EU as one territory without any internal borders or other regulatory obstacles to the free movement of goods and services.”

“The EU-Korea FTA is the most comprehensive free trade agreement ever negotiated by the EU and the first with a partner country in Asia. Import duties are to be eliminated on nearly all products (98.7% of duties in terms of trade value will be eliminated within five years) and there is far-reaching liberalisation of trade in services (including in telecommunications, environmental services, shipping, financial and legal services) covering all modes of supply.” EU-South Korea Free Trade Agreement (FTA).

Free Trade Agreements can be highly specific, for instance, Canada and the EU have negotiated an Agreement between the European Community and Canada on trade in wines and spirit drinks that deals with every aspect of wines and spirits, including Geographical Indications (GI) etc. (Article 14).

Unlike the Single Market, free trade agreements allow trade but do not involve submitting to the laws of one of the parties or to free movement of people etc. There are now so many of these agreements signed by the EU that the UK can get an example “off the peg” and complete a deal quickly.

The Remain media are covering the “Single Market” as if it is the only option for Free Trade in the hope that they can bamboozle us.  Don’t be fooled. We will trade with the “Single Market” but there is no reason to join it and joining it is partially rejoining the EU.

The Single Market has huge disadvantages for the UK.  The biggest problem is that it allows the free movement of capital and labour.  The net result of this is that a Eurozone company can set up a chain of shops in the UK, stock them from the central warehouse in Germany, employ staff from Eastern Europe and remit all profits to headquarters back in the Eurozone. The Eurozone company then uses the same methods as Amazon and Starbucks to ensure that no company tax is paid in the UK.  The net effect of this is a huge Balance of payments current account deficit which now tops £100 billion a year: 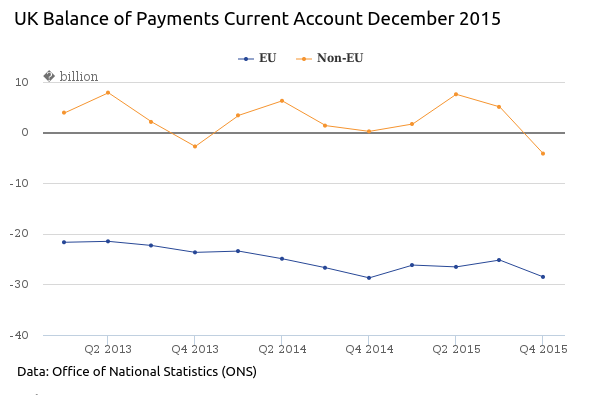 The deficit consists of profits, rents etc. earned in the UK and remitted to the Eurozone and a trade deficit.  The trade deficit is due to a large, growing import bill paid for by an overvalued pound and Eurozone company imports rather than to any failure of UK exporters. 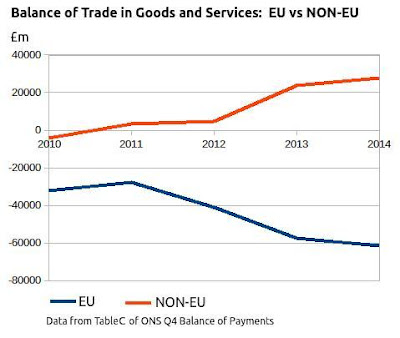 The pound had been high due to the flight of investment from the Eurozone into the UK.  The high value of the pound was a partial cause of the huge trade deficit with the EU and was hindering exports generally so the fall in the pound since 2014 is welcome. Note that the fall in the pound was happening before the EU Referendum and is due to the Balance of Payments deficit and the mild Eurozone recovery since 2014: 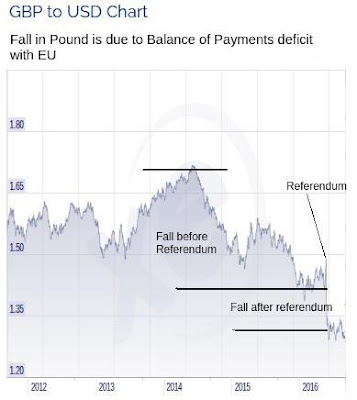 Unfortunately the fall in the pound alone will not correct the serious damage being done to the UK economy by the Single Market.

The UK is faced with the choice of either a set of Trade Agreements with the EU or joining the Single Market.

Economists who favour the “Single Market” (ie: the EU) will obfuscate about services and non-tariff barriers with the EU but the WTO has been reducing tariffs and obstacles in these areas. As an example  a trillion dollars of Information Technology trade is now exempt from tariffs world-wide from 2015.  A Free Trade Agreement will achieve everything that the People want and that business needs.

As well as negotiating a Trade Agreement with the EU the UK might arrange to join EFTA (but not the EEA) where it will obtain ready-made trade deals with much of the world.

If you believe in Brexit you must say NO to the “Single Market” and YES to a trade deal.

Although trade deals with the EU might be useful, a single, over-arching “free” trade deal with the EU is not essential.  The EU and UK are both members of the WTO and the total tariffs payable by the UK for exports to the EU will be very low except on a few specific items such as cars and cheese which we mainly import from the EU rather than export to the EU.  The UK might benefit most from a succession of trade deals with the EU, the first to cover areas such as alcoholic beverages, cheese and cars (the car deal might be slightly in the UK’s favour because the EU exports many more cars to the UK than vice versa).  Mini trade deals will cause little political fallout and will put any industries that are at risk from EU Tariffs at ease.  It may surprise readers to know that small subsidies up to about 3% are permitted by the WTO at any time.  This is important because many EU tariffs that deal with British exports are in this range: 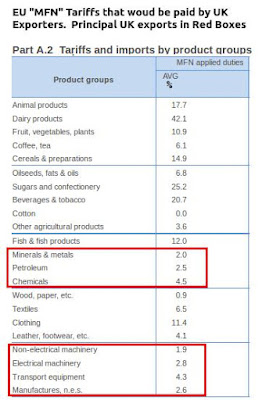 A sensible UK government would declare a period of “special measures” until trade deals are completed whereby all export tariffs to the EU are paid for by import tariffs from the EU. Such special measures are permitted by the WTO, indeed, the WTO explicitly permits measures to be taken in cases of severe Balance of Payments problems such as those between the UK and EU:

“Agreement that contracting parties imposing restrictions for balance-of-payments purposes should do so in the least trade-disruptive manner and should favour price-based measures, like import surcharges and import deposits, rather than quantitative restrictions. Agreement also on procedures for consultations by the GATT Balance-of-Payments Committee as well as for notification of BOP measures.” https://www.wto.org/english/docs_e/legal_e/ursum_e.htm#General

Why is the Single Market a Problem?

It is interesting to consider how the huge trade deficit with the Eurozone works. As an example, a German supermarket will set up its shops using German fixtures and fittings and will have 70% of its stock supplied from the Eurozone and paid for in Germany.  When you buy that stock in the supermarket you are importing goods and increasing the trade deficit; the profit on your purchase will go back to Germany and so increase the Current Account Deficit.

Even in less extreme cases the net effect of Eurozone investment is the same, for instance EDF might build a power plant, it will use French equipment and services because it is based in France, and will import many key workers. It will send all its profits back “home”. It may employ British staff but as likely as not this will result in a staff shortage elsewhere in the economy and an EU worker being employed to fill it.

The Current Account Deficit shows that activity by Eurozone businesses in the UK is a net loss to the UK economy**.  It creates activity without enhancing the infrastructure of the UK and so decreases the road space, housing availability etc. for every British citizen.

The Cameron Government thought all of this is wonderful because they could boast of high foreign investment and apparently grow GDP.  They never explained that the investment was in a French owned power plant that will probably create tax-free profits for the benefit of the Eurozone. They did not mention that the jobs created went either directly or indirectly to Eurozone workers and hence the GDP increase due to the investment benefited the Eurozone and not the UK.  If the UK were free of the “Single Market” it would attract good foreign investment, the type than an advanced country needs, where productivity and wages are raised rather than the economy plundered.  Just stopping the free movement of labour would be a big step in that direction. A judicious hindering of the movement of capital between the UK and Eurozone might also help.

The “Single Market” is of no benefit to the UK.  We do not need rules set in Brussels for the operation of all businesses in the UK.  Only c.12% of UK GDP is due to exports to the Eurozone and only the quality and safety of goods sold to the Eurozone should be dictated by the Eurozone.

More information on the economics of Brexit:
The Imbalance of UK-EU Trade and its Consequences
The Great Myth of EU Tariffs

** The Current Account Deficit is financed using current Euro expenditure by Eurozone companies on stock etc, and using Euros expended on investments in the UK that can subsequently be sold and their value repatriated (ie: the UK is spending money received for investments on imports). A Current Account Deficit is a net loss for almost all countries except those that operate Reserve currencies such as the USA. The dollars that flow out of the USA are kept in dollar accounts abroad for future trading whereas pounds that flow out of the UK are exchanged for local currency or dollars, so devaluing the pound whenever the UK has a balance of payments deficit.

This post was originally published by the author on his personal blog: http://pol-check.blogspot.com/2016/06/the-single-market-versus-free-trade_29.html

Dr John Sydenham has worked in International Pharmaceuticals and for one of the "big four" International Consultancies. He ran a successful company for 15 years and after selling the company devotes his time to travel, science, black labradors and freedom.
Previous We must also defend opponents from injustice
Next The costs of housing policies