It’s not very long ago that Alex Salmond was accusing Nicola Sturgeon and the Scottish Government of conspiring to put him in jail. Now he wants her not only to continue as First Minister, but in a few years most likely to be the first leader of an independent Scotland. This if nothing else illustrates the power of Scottish nationalism. Its appeal is to the emotions rather than the intellect for which reason it uses popular history from the distant past to obscure the present reality. It’s why the scandal involving Sturgeon and Salmond has already been forgotten as if it never happened at all. Instead we focus on a myth about a spider trying again and demand another go.

We don’t really know what Alex Salmond did when he lived in Bute House. He was acquitted. But even if he committed no crime, he has admitted that he sometimes behaved badly. We don’t know the full extent of what Nicola Sturgeon knew, when she knew it and whether she was involved in trying to get Salmond jailed, but there is enough evidence to justify suspicion that both Sturgeon and the Scottish Government likewise misbehaved. In any normal country there would be a full judicial inquiry with an independent judge and the power to compel all evidence to be made available, but this is Scotland and so we ignore, forget and join forces in a common struggle against the Auld Enemy.

What we learned about how the SNP Government might have tried to get Salmond jailed would be enough to destroy support for that party in any normal country. Even the suspicion of such corruption would be enough for voters to get rid of such a Government worried with justification that if it continued it might become still more corrupt. But in Scotland we forget recent events quickly because of myths about a past of which we know little.

What we know about Salmond suggests that his behaviour was on the surface not dissimilar to that of someone like Charlie Elphicke or indeed Harvey Weinstein. The jury chose to believe that Salmond’s misbehaviour was not criminal, perhaps sensing that the accounts had been exaggerated or that there was some sort of conspiracy. But Salmond did misbehave and in some countries such misbehaviour might have led to jail rather than Holyrood. But in Scotland we don’t much care whether Robert the Bruce murdered this rival just so long as he can defeat the English.

Scottish nationalism at present resembles the Molotov Ribbentrop pact. Salmondites think that Sturgeon tried to get their man jailed, but they’ll vote for the SNP because that’s the only way they can get a second go. Sturgeon supporters may believe that Salmond was lucky to get off and that there was no conspiracy at all, but they still might be tempted to try to create a nationalist super-majority even if it involves electing a man whose reputation is less than it ought to be. 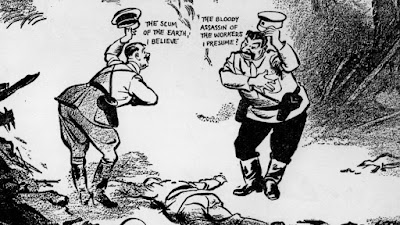 But while sworn enemies on the nationalist side are willing to work together, absurdly the Pro UK parties are determined to fight them separately. They each argue that both votes must go to them even when both votes will be wasted and refuse even to contemplate uniting. How bad does it have to get before the Pro UK parties change tactics? If there was only one Conservative, Labour and Lib Dem MSP they would still refuse to work together or join forces, yet these are the people arguing for unity. They might as well attack panzers with cavalry.

The appeal of nationalism politically is that it means that the SNP does not have to campaign on its record. If you mention Scotland, Scottish, or Scot twice in every sentence the Scottish voters ignore Scottish education, Scottish Healthcare and the corruption in the Scottish Parliament. If the Salmond/Sturgeon scandal doesn’t dent support for Scottish nationalism, nothing will.

It matters nothing to Scottish nationalists that the UK has been working rather well during the pandemic. The Scottish Government did not pay our wages, nor did it help our companies. The SNP were not responsible for Britain having vaccinated so many more people than the EU. But we take the money and the vaccine yet view it with contempt as coming from a tainted source, because of a battle that happened seven hundred years ago.

There is a limit to what argument can do against emotion. Demagogues use nationalism, because they bypass criticism and most frequently bypass thought.

Politics ought to be a debate about how to make the lives of most people better. That’s the purpose of democracy. The majority has the right to decide that these policies will make most of us have more pleasant lives. Sometimes the majority gets it wrong and another party gets the chance. But politics must be rooted in a debate about policy otherwise it rapidly moves into something else.

The appeal of nationalism politically is that it ought to have a built-in majority indeed enough of a majority to defeat all opposition. There are after all in Scotland more Scots than anyone else. The appeal to nationality ought to give you an unassailable majority, which is why such an appeal is made by tyrants.

Scottish nationalists believe that somehow independence will transform their lives while they are indifferent to every other policy that the Scottish Government tries to implement and are hostile to the UK even when British Government policy demonstrably brings us good. There is no argument against this. The only argument is the reality that independence would bring.

People like Nicola Sturgeon and Alex Salmond would support Scottish independence even if they knew that it would make us considerably poorer and with worse education and health outcomes than if we remained a part of the UK. Many independence supporters would agree. The emotional appeal of nationalism is not about health or education or any other policy. It is for this reason that the SNP’s record is ignored. But independence can only plausibly be portrayed as a left-wing goal if it would make poorer Scots wealthier and it is hard to see how this is possible by giving up the Treasury money that other British people share with us. If you believe in sharing why reject the UK that shares between its parts?

Poorer Scots may be conned by nationalism into believing that it will make their lives better, but they would be betrayed just as they were conned into joining the cause of Robert the Bruce who used nationalism to pretend that he cared about their lives when instead he cared only about his own power, wealth and prestige.  No doubt he promised Scottish peasants, wealth, and freedom if they fought for independence against the English, but they merely exchanged one absolute monarch for another and did not notice the difference.

This post was originally published by the author on her personal blog: https://www.effiedeans.com/2021/04/the-sturgeonsalmond-pact.html

Effie Deans is a pro UK blogger who works at the University of Aberdeen. She spent many years living in Russia and the Soviet Union, but came home to Scotland so as to enjoy living in a multi-party democracy! When not occupied with Scottish politics she writes fiction and thinks about theology, philosophy and Russian literature.
Previous Great news: UK-EU Trade heading in the right direction.
Next Let’s Celebrate St. George’s Day and be proud of our English identity