The Supreme Court Rules Against the People

On 24th September 2019, the UK Supreme Court ruled that the current prorogation of Parliament was illegal.

The Supreme Court began its ruling with the concept of dividing the process into whether the Court had the power to intervene in a political decision such as prorogation (judiciability) and then, if the Court had the power, to rule on the legality of the prorogation. It backtracked on this and ruled that if a prorogue had a political effect it was unlawful. In other words it ruled that the Courts always have the power to examine prorogation, especially if it involves political considerations (See Note 1). The Court set the precedent that it was empowered to decide political matters: “the court will intervene if the effect [of a prorogue] is sufficiently serious to justify such an exceptional course”.

Had the Fixed Term Parliaments Act 2011 not been passed this ruling would have prompted a General Election.  Unfortunately this opportunity for the People to be involved in their political future is no longer available. Parliament realises that it can hold onto power until 2022 whatever the People might desire. It can paralyse government and reduce the country to ruin.

The Supreme Court seemed unaware of the fact that Parliament is holding the People and Government hostage.  The Government is unable to govern and unable to hold an election. This current Parliament was elected in 2017 to implement leaving the EU and then reneged on that promise.  Despite this duplicity, the Court declared that Parliamentary instructions to Government such as the European Union (Withdrawal) (No 2) Act 2019 were the essential business of Parliament and by implication that Parliament was the true Government of the UK, not the body that merely holds Government to account.  It upheld the idea of Parliament controlling the government like a macabre puppet as the preferred method of governance in the UK. 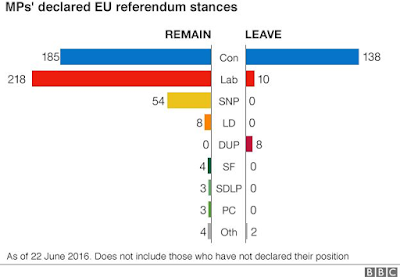 The most galling part of the Supreme Court judgement is that it portrayed Parliament as a sober place where Governments submit legislation for careful scrutiny by the representatives of the People.  The truth today is that Parliament is a place where unrepresentative Remain MPs have pinned a minority Government to the ropes and are beating it savagely, with no hope of release, and ordering it to do as Parliament demands. This truth is so contrary to the assumptions of the Supreme Court that it makes the verdict a mockery of justice.

Power has now passed from the People or Government to Parliament and the Courts.  As every day passes the People will lose confidence in Parliament because it does not represent them and denies them the ability to resolve this with an election.  History and the experience of other countries shows that such hubris by a governing class can have a catastrophic effect on society and democracy.

Notes from the Supreme Court Judgement

Note 1: “For  the  purposes  of  the  present  case,  therefore,  the  relevant  limit  upon  the power  to  prorogue  can  be  expressed  in  this  way:  that  a  decision  to  prorogue Parliament (or to advise the monarch to prorogue Parliament) will be unlawful if the prorogation has the effect of frustrating or preventing, without reasonable justification, the ability  of Parliament to carry  out its constitutional functions as a legislature and as the body responsible for the supervision of the executive. In such a situation, the court will intervene if the effect is sufficiently serious to justify such an exceptional course”

Note 2: 57.Such  an  interruption  in  the  process  of  responsible  government  might  not matter  in  some  circumstances.  But  the  circumstances  here  were,  as  already explained,  quite  exceptional.  A  fundamental  change  was  due  to  take  place  in  the Constitution of the United Kingdom on 31st October 2019. Whether or not this is a good thing is not for this or any other court to judge. The people have decided that. But that Parliament, and in particular the House of Commons as the democratically elected representatives of the people, has a right to have a voice in how that change comes about is indisputable. And the House of Commons has already demonstrated, by  its  motions  against  leaving  without  an  agreement  and  by  the  European  Union (Withdrawal) (No 2) Act 2019, that it does  not support the Prime Minister on the critical issue for his Government at this time and that it is especially important that he be ready to face the House of Commons.

Note 3: The Court could not comment on the fact that over 20 Conservative MPs have openly reneged on their electoral pledge in 2017 to deliver Brexit and most of the Labour Party have done the same. They are no longer representatives of the People and this can only be resolved by an election that they are denying the People.

Dr John Sydenham has worked in International Pharmaceuticals and for one of the "big four" International Consultancies. He ran a successful company for 15 years and after selling the company devotes his time to travel, science, black labradors and freedom.
Previous Free market vs socialism: supply and demand
Next Mole hill