The truth about old people being “rich”

Since the EU referendum Remain voters have been in a state of shock, wondering how Brexit could be happening.  One of the targets for the media groups who back Remain has been retired people. The implied narrative is that stupid old people voted for Brexit because they were doing very well for themselves and did not care about young people.

The truth is that pensioners are largely doing as well, relative to the rest of the population as they always have except for a period after the financial crisis: 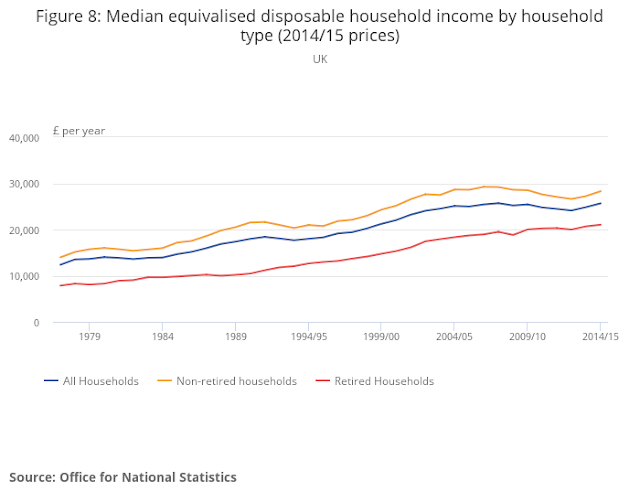 It was the crash that lowered ordinary wages ONS Data

Generally pensioner households have received 70-80% of the average household income but between 2008 and 2014 they did a bit better than the rest of the population, just topping 80% of what the rest of the population receive in 2011-12 (this was a result of falling wages after the financial crisis) Pensioner incomes have recently started to fall back relative to the general population.  Not only is there no evidence for the “rich pensioners” but the only reason pensioners are keeping their place relative to workers is that they have contributed tens of thousands of pounds to their private pensions over decades of working life. 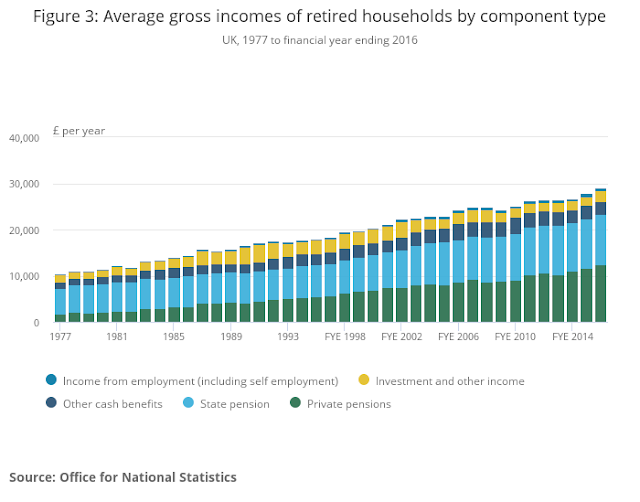 The Remain narrative has been to insult Leave voters: “Racists, xenophobes, stupid, uneducated, senile, selfish” but few of these insults have much basis in fact.  Indeed, the evaporation of the UKIP vote after the referendum should make any Remain voter consider very carefully about the way they think about Leave voters.

It is just possible, if the Remain voter re-visits the arguments, they will find that Leave were actually right.  See for instance:

The Expert Predictions about the Referendum and Brexit

The Effects of Eurozone Ownership of the UK Economy

It is also worth remembering that no-one cares more for you and your future than your parents and grandparents.  That media organisations may have convinced you that older people voted Leave because they did not care about younger people should make you stop dead in your tracks.  You can be absolutely certain that that is a barefaced lie, now, stop and think “who runs these organisations that have such power that they have made me think that such a lie could be true?”  See The people who run the media.

This post was originally published by the author on his personal blog: http://pol-check.blogspot.com/2018/05/the-truth-about-old-people-being-rich.html

Dr John Sydenham has worked in International Pharmaceuticals and for one of the "big four" International Consultancies. He ran a successful company for 15 years and after selling the company devotes his time to travel, science, black labradors and freedom.
Previous The Conservative Party is a true Champion of the Sustainable Development Goals
Next Cook Pt 2: Operationalising the Concept