There is developing an extraordinary difference between Theresa May and Nicola Sturgeon. It is impossible to imagine Nicola Sturgeon going to Washington and charming everyone she meets. While May has dignity, character, politeness and obvious intellect, Sturgeon simply doesn’t. May puts her points with force, but not with anger. She is subtle while Sturgeon has the subtlety of a Glasgow handshake. I can’t recall hearing Theresa May make an overt threat. I can’t recall hearing Nicola Sturgeon have a conversation that doesn’t involve a threat. I can’t remember Theresa May ever saying something that could be described as a grievance. She suggests the motto “Never complain, never explain”. The force is in what she doesn’t say. I can’t remember Sturgeon saying anything that didn’t involve a grievance. It’s always someone else’s fault (this is why she is mocked as Elsie).  She is incapable of taking responsibility for anything.

It must be tough for Sturgeon to see how Theresa May is doing so well. I don’t remember particularly rating May prior to her becoming Prime Minister. She was just another Tory minister who had not achieved particularly much as Home Secretary. She set out to limit immigration to the tens of thousands and then didn’t campaign for the only method which she knew would achieve that goal. I found her decision to back Remain, but then hardly campaign for it to be lacking in conviction. I would have chosen someone else to be Prime Minister.

But May has done much better than expected. Her speech when she became Prime Minister set the tone. Her defence of the UK was most welcome. Her answer to Nicola Sturgeon that the question of Scottish independence has been settled was perfect. She didn’t get angry with Sturgeon. She went up to Edinburgh and didn’t complain when she was made to sit in front of two Scottish flags. It was a matter of indifference to May, something trivial, while the fact that it was so obviously crucial to Sturgeon showed that the SNP leader was trivial, concerned more with appearance than substance.

During the EU referendum the Tory party was at war with itself, but May brought peace in a way that perhaps no-one else could have. The Brexiteers were given high ranking positions, the Cameroons were driven into the wilderness and Remain supporters like Philip Hammond and indeed May herself worked hard to make Brexit a reality.

While some Remain supporters fought a rear-guard battle to prevent us leaving the EU, May didn’t throw a tantrum à la Sturgeon. Instead she gradually made it happen. Now the rear-guard looks like noise, the sort of thing that is forgotten by history. There was a Supreme Court judgement the other week, but it no longer mattered.

Theresa May has turned out to be a lucky Prime Minister. Who could have guessed in June that Winston Churchill’s bust would be back in the Oval office? Who could have guessed that the President of the United States would actually like Britain and would offer us a trade deal? It looks very much as if Theresa May is able to do business with Trump. Her quiet manner works. She doesn’t set out to offend him. Rather she quietly fulfils her diplomatic mission. 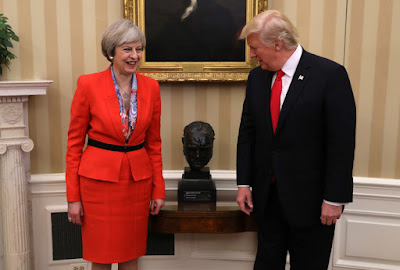 Trump thought NATO was obsolete, but after a short conversation with Mrs May he is 100% in favour once more. Some European leaders ought to be grateful that a British Prime Minister has been so helpful with their security concerns. It may be that the UK can take on the role of go-between.

Could Nicola Sturgeon have achieved so much? Obviously not. What May has demonstrated is that the UK is respected in the world. We have allies. We have a role. Scottish nationalists naturally will be fuming about this. They universally hate the UK or at the very least dislike it. Why would you want to destroy something that you like?

What they forget is that our allies in the rest of the world would very much prefer that the UK continued. People in the whole of the UK must realise that our place in the world depends on our remaining united. There will be no “special relationship” if the UK ceases to exist. At present we punch above our weight because we have been doing so for centuries. Who would listen to a country that couldn’t even keep itself together? With our armed forces split and no place to moor our nuclear submarines why would we continue to merit a place on the UN Security Council? What would the UK even be called if Scotland left? It could hardly be called United.

English nationalists who owing to Sturgeon’s threats and petulance have become indifferent to the fate of the UK should think again. Scotland’s departure would damage you as well. No sensible country looks on the loss of a third of its territory as something to be welcomed. The Spanish don’t think like that, nor indeed do the Americans. It’s not serious.

The power that we have internationally, which itself gives us the influence which will enable us to trade freely, depends on our unity. This is the lesson from the three hundred and more years in which the United Kingdom has existed. You’d throw all that away because you are annoyed at having to listen to Sturgeon? That’s what she wants by the way? We stuck by Northern Ireland when it was threatened by those who hated Britain. We didn’t give up on Northern Ireland because we became sick of listening to Gerry Adams and friends. The same British grit is needed now. Sturgeon does not speak for Scotland. She speaks for her supporters and they are a minority. The majority of Scots just like the majority of people from Northern Ireland wish to remain British. We need the support of all British people. So please never do Nicola Strugeon’s job for her. 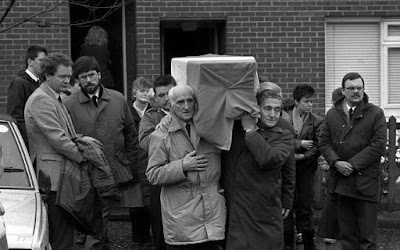 Theresa May has shown that we have a bright future together. It is obvious that Brexit is going to work. If dreadful things were going to happen to the economy they would already have happened. They didn’t.

We will need to adjust to find our new role in the world. We will need a leader to guide us on that path. Luckily we have found one. It would have seemed impossible a year ago, but Theresa May has a chance to reach greatness. If she can successfully negotiate a beneficial exit from the EU, if she can keep our country united and if she can establish us as a free trade society that is open to the world, her place in history will be assured. If we unite behind her she will succeed and so indeed will we all.

This post was originally published by the author: http://effiedeans.blogspot.com/2017/02/theresa-may-makes-sturgeon-look-petty.html

Effie Deans is a pro UK blogger who works at the University of Aberdeen. She spent many years living in Russia and the Soviet Union, but came home to Scotland so as to enjoy living in a multi-party democracy! When not occupied with Scottish politics she writes fiction and thinks about theology, philosophy and Russian literature.
Previous The popular image of American gun owners is wrong
Next Germany’s domination of the EU is immoral and is impoverishing Europe