The Destruction of Uyghur Towns

China has reacted to the failure of the West to condemn Concentration Camps for Uyghurs and ignoring the origin of COVID19 by expanding these camps and sending 500,000 Tibetans into forced labour.

Western governments seem to have forgotten that you cannot appease National Socialists such as China.

Perhaps as bad as the Concentration Camps are the forced labour transfer schemes where Uyghurs and Tibetans are scattered across China in small groups to work as forced labour for Amazon, Nike etc.  Over 80,000 Uyghurs have been forced out of Xinjiang in this way.  The factories that use them pay a charge per head, the labourers are then housed in separate blocks with Chinese “minders” to ensure that they do not engage in religious worship or other “subversive” activity.

China is also demolishing whole towns in Xinjiang, scattering their inhabitants across China and replacing them with Han Chinese.  In both Tibet and Xinjiang China is using population replacement with Han to occupy the land.

In Tibet the Chinese are forcing Tibetans into large work camps.  Half a million having been placed in work camps since January.  This is a third of the native Tibetan population.

China is also summarily executing those Uyghurs who are accused of terrorism (such as speaking freely) and executing members of the harmless Falun Gong religion then using their organs to treat Han Chinese who need transplants. 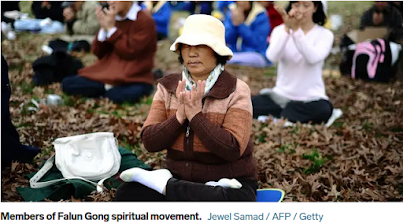 National Socialism is the only real competitor for democracy because it also feeds on a capitalist economy and hence has the economic volume required for power.  Multinational Corporations cannot distinguish between repressive and democratic capitalism because they have no moral compass.

Over the past 20 years the Western media has attempted to portray the meteoric rise of China as harmless and those who point out what is happening as doing so for self interested political reasons.  Most people in the West are unaware that China is now a modernised State with six lane highways and a military that is threatening to match that of the USA in equipment and greatly outmatch it in numbers. The power of the Multinational Corporations and China is breathtaking.

Meanwhile the broadcast media, such as the BBC, are doing all they can to divert us from reality with ID Politics.

Today it is Xinjiang and Tibet, tomorrow it will be Taiwan and the South China Sea, after that it will be war with India.  This is probably the last chance we have to turn the tide, China must be expelled from the WTO and embargoed, its overseas assets seized.

and More Evidence that COVID19 is Man Made (in China).

and Factcheckers rely on one source for origins of COVID19 so suppressing all new data on its origin.

This post was originally published by the author on his personal blog: https://pol-check.blogspot.com/2020/09/tibetans-moved-to-concentration-camps.html

Dr John Sydenham has worked in International Pharmaceuticals and for one of the "big four" International Consultancies. He ran a successful company for 15 years and after selling the company devotes his time to travel, science, black labradors and freedom.
Previous Was lockdown needed?
Next Sharing a trench with Starmer