The Policy Exchange has just produced a report called Academic freedom in the UK. The report shows that UK Universities have indeed been subverted by the political “Left” – Labour and LibDems. The discrimination against Conservative voters is so extreme that emergency action is necessary.

The findings of this report confirm those of many previous studies. There are no studies showing that UK universities have been taken over by the “Right”. This new report is useful because it is wide ranging and covers areas from the dispensation of Grants to social discrimination.

How bad are the universities?

When allocating grants the “professoriate” were routinely discriminating against staff who voted Conservative or produced work that supported a conservative viewpoint. At each grant cycle the conservative workers had only about 80% of the chance of getting a grant compared with others from Labour or Lib Dems. This means that in four grant cycles, with 80% of the normal chance in each cycle, conservatives have only half the chance of others of remaining in academic work.

It is clear that the exclusion activity of the Left began in the mid 1970s.

This bias was also happening when awarding promotions. The process of withholding grants and promotions has led to universities having a political profile that is different from that of society at large. University professors and lecturers were composed of even lower proportions of conservative voters, as one might expect after 20 years of discrimination against the Conservative Party: 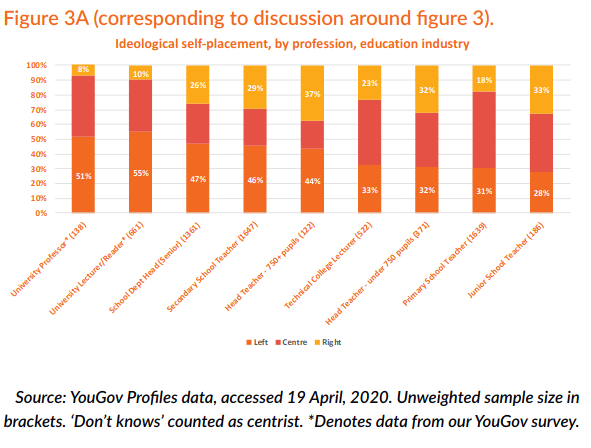 Universities are outliers even in the Education Industry

The Policy Exchange Report was actually biased against Conservatives, for instance it suggested that “Much of the difference between academics’ political preferences and those of the general population can be explained by education level” . This statement is hilarious because education level is a measure of academic status so the statement reduces to: “Academic level (ie: education) explains Academic’s political opinions”. Look at Figure 2 above, if it was just “clever” to support socialism then Academics were stupid before the mid 1970s. 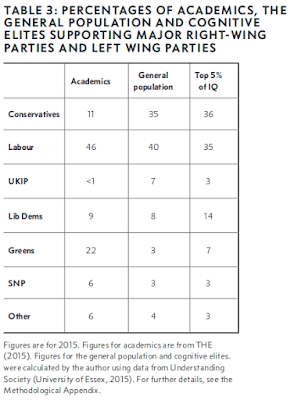 The Policy Exchange Report was also biased because it included “far right” when the breakdown of 799 respondents was:

There are no excuses. Universities are using Government money, our money, to recruit and cultivate left wingers whilst excluding Conservatives.

The Report then goes on to describe widespread harassment of staff for their beliefs. 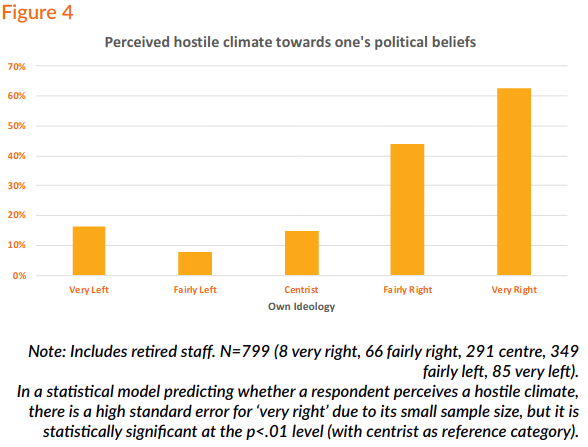 Such employment practices where employees are being discriminated against and harassed are illegal under Section 10 the Equality Act 2010 and must be stopped.

When I have discussed this harassment with Academics they have regarded it as some sort of joke – of course horrible Conservatives should be excluded, who would want such idiots in your department? Again, under the Equality Act 2010 such statements are grounds for dismissal, even if made on Twitter, and this is not a joke.

The Policy Exchange proposes various worthy measures to ameliorate discrimination but misses the point that discrimination and harassment on grounds of belief is illegal. The way to stop it is to dismiss senior academics and managers where it is obvious that their departments are unrepresentative. The Equality Act 2010 expects employers to dismiss staff that harass and discriminate and the employers can be prosecuted for failing to do so. Ultimately the Department for Education should be prosecuted if it does nothing.

This post was originally published by the author on his personal blog: https://pol-check.blogspot.com/2020/08/uk-universities-bar-conservative-voters.html

Dr John Sydenham has worked in International Pharmaceuticals and for one of the "big four" International Consultancies. He ran a successful company for 15 years and after selling the company devotes his time to travel, science, black labradors and freedom.
Previous Give Douglas Ross a chance
Next Britain must be firm but fair about migration