US Bank Behind EU Membership Referendum

In the recent past we have heard that Brexit will cause:  Sterling to crash by 20% (1),  Banks to move to EU (2),  Banks on both sides of Atlantic to be struck down by uncertainty (3), London to lose its status as financial capital (4) etc.

These were all rumours put out by US banking giant Goldman Sachs. (Check the links provided above if you dont believe it).  This American bank is one of the main, if not principal financers of the “Britain Stronger in Europe Campaign”.  In fact they, along with the European Movement, started the remain campaign. Yes, Britain Stronger in Europe was started by and financed by an American investment bank.

Goldman Sachs is particularly famous in the UK because it, and the other big US, “Stronger In” backer,  JP Morgan, precipitated Gordon Brown’s give away of UK gold between 1999 and 2002. No-one knows why Brown rescued these US Banks with British taxpayer’s money.We do know that Tony Blair retired into Directorship with JP Morgan which also involved huge consultancy fees.

Why is a US investment bank so desperate to influence British politics?  To understand this we need to understand that Goldman Sachs does not appear to be an upright company.  In fact in America the bank is openly derided in the strongest terms:

Yet those voting “Remain” in the EU Referendum believe and support those financed by this monster.  Strong words? Read on:

“The bank’s unprecedented reach and power have enabled it to turn all of America into a giant pump-and-dump scam, manipulating whole economic sectors for years at a time, moving the dice game as this or that market collapses, and all the time gorging itself on the unseen costs that are breaking families everywhere..” The Great American Bubble Machine

In the USA they know Goldman Sachs and revile it.  It is said that its most vicious trait is the way it launches senior staff into government allegedly as payback for financing election campaigns:

Goldman Sachs Alumni get everywhere and it pays off, for instance Henry Paulson (a Goldman Sachs man) launched the US bank bailout and one of its greatest beneficiaries was Goldman Sachs: 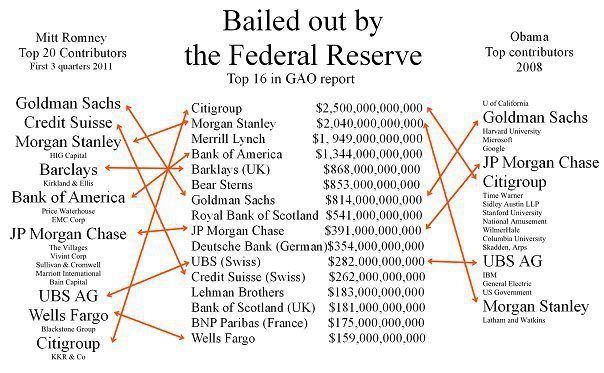 Goldman Sachs are now getting the contracts for selling off government assets such as RBS.  The Government has let Goldman Sachs off its UK taxes through a special dispensation by HMRC.

It would be interesting to know what George Osborne and the Tories are getting in return for these favours to Goldman Sachs.  In the USA Goldman Sachs openly fund politicians with large sums.  In the UK the funding is less obvious.  The Conservatives are particularly fond of fund raising dinners and balls.  As an example a member of the Cameron’s Leader’s Group pays £50,000 and gets dinner.  Christopher French, Head of European Investment Banking, attended in 2015 for Goldman Sachs who send someone most years. A list of these relatively small donors is given here.  The Tories get their most significant donations from bankers and hedge funds (See bank rolling the Tories).  However, the really big funding seems to come from loans that are never repaid.  Loans from abroad did not need to be declared and there is evidence of loans from Goldman Sachs alumni such as £1m in 2006 and £2.5m in 2005 from Mr Hintze:

“Mr Hintze, a former trader at investment bank Goldman Sachs, has dual Australian and British nationality and is reported to have funnelled his loan through an offshore trust based in Jersey.” (Sky News)

However, this method of bribing the Tories has now been shut down and we don’t really know how they are getting the big money today.  One would suspect some scam involving Goldman Sachs.

Goldman Sachs is exceptional because it really does seem to be corrupt on the grand scale and lying is its modus operandi:

“Goldman Sachs CEO Lloyd Blankfein should be hung by his thumbs in a public square… Because the climate he oversees at Goldman is completely void of common morals and ethics. This bunch of bloodsuckers would sell out their own mother if it meant they could put a couple bucks in their pocket.”  How Corrupt is Goldman Sachs?

“The Federal Bureau of Investigation and the U.S. Department of Justice are examining Goldman Sachs Group Inc’s role in allegations of corruption and money laundering at Malaysian state investor 1Malaysia Development Bhd (1MDB), the Wall Street Journal reported on Wednesday.” Reuters This involves a $700m dollar bribe taken by the Prime Minister of Malaysia.

It is probable that Goldman Sachs’ “influence” was responsible for the failure of the US Federal Reserve to act until the Financial Crisis was well under way.  Bloomberg.

Nowhere is immune: “What finally broke her government was the deal to sell a large stake in Dong Energy to Goldman Sachs, while giving them veto rights over management decisions.    The deal was opposed by 68% of the Danish public, and it brought out thousands of protesters.” Daily Kos: Goldman Sachs brings down another European Government

Yet the British media treat foreign funding of “Stronger In” as if it were perfectly natural and make no mention of the fact that the Investment Bank that is paying the piper is a corporate renegade than almost counts as a criminal organisation.  The media presentation of the EU has been so successful that there are middle aged, middle class ladies who think the EU is some sort of social project!   It would be funny if it wasn’t so….

This post was originally published by the author: https://pol-check.blogspot.com/2016/03/us-bank-behind-eu-membership-referendum.html

Dr John Sydenham has worked in International Pharmaceuticals and for one of the "big four" International Consultancies. He ran a successful company for 15 years and after selling the company devotes his time to travel, science, black labradors and freedom.
Previous The Referendum contradiction
Next Destroying the SNP’s dream