By an amazing piece of good luck the Aberdeen branch of the Wallace Must Fall Campaign has discovered a hitherto unknown letter between William Wallace and Robert the Bruce. One of the problems of medieval history is that so few contemporary sources survive. We are forced to rely frequently on Blind Harry whose reliability as a witness is hindered not merely by him being blind, but more importantly by the fact that he lived some hundreds of years after the events he describes. But finally we have a contemporary source which provides us with insight into the mind of Wallace and the motivations for his actions.

In time it is hoped that a full facsimile of the letter will be published, but for the moment it is necessary to rely on a summary. In the letter Wallace expresses his concern about his serfs and expresses his fears about the malign influence of Magna Carta (1215) spreading to Scotland. With wonderful insight into the future Wallace foresees that limiting the rights of the English barons will limit the power of the English king. He realises that ultimately it is bound to lead to a peasants’ revolt and with it the end of serfdom. In order to maintain the rights of the nobility in Scotland, Wallace concludes, it is necessary to fight the English who otherwise will bring with them emancipation.

The Wallace Must Fall Campaign already knew that both Wallace and Bruce were slaveholders. Every member of the nobility in Scotland owned serfs, which is of course another word for slave. What was unknown until now was that the motivation of Wallace in fighting for “freedom” was to maintain the slavery of those serfs that he owned.

It is clearly unacceptable to have statues of slaveholders, especially when they fought a war of independence precisely in order to maintain the bondage of these slaves. It is for this reason that the Aberdeen branch of the Wallace Must Fall Campaign proposes to put a rope around the neck of the statue of William Wallace and pull it down.

Meanwhile the Aberdeen branch of the Bonnie Prince Charlie Must Fall Campaign has discovered a hitherto unknown letter in which he expresses admiration for the fact that there is still serfdom in Scotland. In fact there were Scottish serfs until 1799. Charles Edward describes this as just one of the many reasons for why he wants aims to get his father’s kingdom back. He likewise expresses his disdain for the so called “glorious” revolution of 1688 and the Bill of Rights that came with it in 1689. Once more the dreadful Magna Carta codified into law along with other malign documents such as the Petition of Right (1628) and the Habeas Corpus Act (1679) seeks to limit the rights of Scottish kings and nobles. This must be resisted in the name of FREEEEEDOM. All of these attempts to restrict the divine right of the Bonnie Prince are intolerable. He goes on to express his admiration for the Clan system (i.e. feudalism) whereby members of the clan must work for the chief without pay. Charles Edward describes how he hopes to spread this system of bondage throughout his father’s kingdom. What works so well in Ballachulish ought to work still better in Bedford. Think of the costs saved when the kingdom had no need to pay wages. 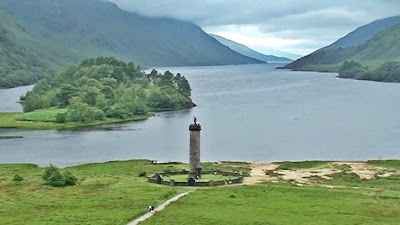 The Aberdeen Branch of the Bonnie Prince Charlie Must Fall Campaign thinks it is disgraceful that modern Scottish nationalists call themselves after the 1745 campaign to bring slavery to Britain. Unfortunately there is no statue of Charles Edward Stuart in Aberdeen, but it is prosed to erect such a statue for the purpose of then toppling it.

Meanwhile the Aberdeen branch of the Robert Burns Must Fall Campaign have discovered a letter which adds to what we already know about the poet’s intention of working on a slave plantation in Jamaica. The hypocrisy of Burns is fully shown. While he was willing to write The Slave’s Lament he had less than enlightened views about black people and used words about them that would see him condemned by any right thinking person in the world today. It is clearly unacceptable to have a statue of someone who wished to earn his wages on the back of slaves. Luckily there is such a statue of Robert Burns in Aberdeen so it will be unnecessary to erect one before tearing it down. 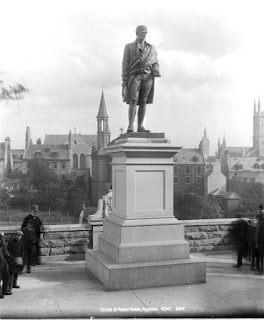 The Aberdeen branches of the Wallace, Bonnie Prince Charlie, and Burns Must Fall Campaigns are looking to further their work of ridding Aberdeen of all monuments to anyone who in any way is unworthy of being looked at. It would greatly appreciate suggestions of any other monument that should be torn down. With luck our campaign will spread and in time there will be no unsuitable monuments at all in Aberdeen and then if others follow this example no more such monuments in Scotland. Today Aberdeen, Tomorrow the world!

This post was originally published by the author on her personal blog: http://effiedeans.blogspot.co.uk/2017/08/wallace-must-fall.html

Effie Deans is a pro UK blogger who works at the University of Aberdeen. She spent many years living in Russia and the Soviet Union, but came home to Scotland so as to enjoy living in a multi-party democracy! When not occupied with Scottish politics she writes fiction and thinks about theology, philosophy and Russian literature.
Previous Women-Only Train Carriages: Identity Politics Leads To Calls For Segregation, Once Again
Next Green and Pleasant Land: Requiem For a Forgotten Britain