In every previous virus epidemic in history there was no lockdown. Neither in 1918-1919 (Spanish flu), nor 1957-1958 (Asian Flu) nor in 1968-1969 (Hong Kong Flu) did we attempt to prevent people from working or going to school. What if we had done the same this time? What if back in March we had said, there is a horrible new illness, your best bet is to wash your hands as much as possible with sanitiser but otherwise carry on as normal? What would have happened?

Older people infected with Covid would not have been sent back from hospital to care homes. These older people were only sent back because various scientists had predicted that the NHS would be overwhelmed, so wards had to be emptied. If these older people had been left alone, to be looked after in hospital, how many deaths would have been prevented in care homes?

How many people have lost their jobs due to Covid or faced any other sort of financial crisis that would not happened if we had continued working as normal in March? We know that losing a job and economic recession in general can make people less healthy, more depressed and more likely to die younger.

It is of course impossible to assess accurately exactly what would have happened if we had done nothing in March, but we do know that even if lockdown saved some lives, it cost others. It was always a balancing act. But did we get the balance right or wrong?

The UK has had nearly 42,000 deaths due to Covid. But this has to be put into the context that a bad seasonal flu year killed 28,000 in England in 2014-2015 and 26,000 in 2017-2018. We don’t remember these or even particularly noticed them. This is because we don’t have daily death flu updates every day on the news and because flu deaths rarely happen to the young and the healthy?

So Covid deaths in the UK at present are only a little more than flu deaths in 2014-2015. How much higher would Covid deaths have been if we had done nothing? Would they have been twice as much? If so, they would only just have surpassed deaths from Hong Kong Flu in 1968-1969, which killed 80,000 British people. They would have to have been five times worse to have surpassed the 200,000-death toll in 1918-1919. We know that lockdown cost some lives and it probably saved some lives, but it’s impossible to know how many, without re-running history once where we have lockdown and once where we do nothing.

But we do know this? From March to late June, Covid caused 40,000 deaths, but from then to now it has caused less than 2,000. While in April there were frequently 5,000 new cases per day and 1000 and more deaths. Now there are more than 4000 new cases a day but less than 30 deaths. There is a lag, between cases and deaths, but cases have been increasing for some weeks now with no great increase in the death rate. It is reasonable to conclude that Covid has become a milder illness that causes fewer deaths. 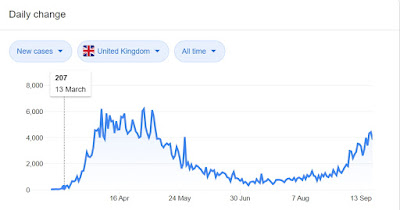 It is far easier to understand the logic of lockdown when Covid was killing more than 1000 a day. Clearly at that point preventing new cases was crucial to saving lives. But if we continue to have less than 30 cases a day it would take us years before Covid surpassed the Hong Kong flu death toll in 1968-1969. If daily deaths were going to reach the thousands again, why haven’t they greatly increased already? Deaths have nearly flatlined in August and September, but cases have increased. 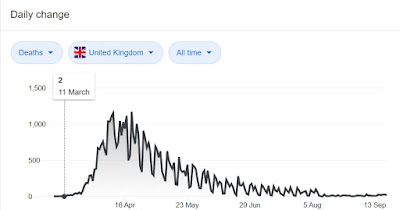 It was impossible to know in March how serious Covid was. But the number of deaths worldwide is still only a quarter of the worst estimate of deaths from Hong Kong Flu. Unless Covid gets significantly worse and starts killing more people, then we will be forced to conclude that it was less severe than Hong Kong flu an illness many British people living at the time can’t even remember.

If it turns out that Covid is really less deadly than Hong Kong Flu then much of the world including Britain has just made the worst decision in history in locking down our country, keeping children away from school and workers away from their jobs. We have we put ourselves in debt, caused a recession and ruined many lives, for no purpose. Why have we done this?

We have done it because scientists have consistently shown themselves to be inadequate in predicting the severity of Covid, they have been alarmist and they have been given far too much power given that they cannot agree even among themselves.

We have locked down because the media has demanded it, has failed to put Covid deaths into their proper context, and tried to scare the wits out of the British public.

If you read accounts of previous epidemics, people went about their lives as normally as possible and did not overly worry. They did not worry because they were used to death. There were many more dangerous diseases that might kill back then. They were used to the possibility of having to give their lives in war or in childbirth. Death was something normal and they were not afraid of it, not least because they had a faith that most now normally lack.

The only eternity for us is the long years stretching into our 90s in a care home to which we feel entitled. Medicine and the NHS has become our religion for which reason we are childish about death as depriving us of our due. We are overly sentimental about death because we treat it as something not normal and indeed an outrageous imposition.

We are no longer the people who read the casualty pages in July 1916 with stoicism, lack of fuss and determination to carry on. We are not the people who responded to Dunkirk with humour and the will to get on with it.

Somehow, we lost that spirit and that is why we will be locked up and locked down and threatened with fines if we don’t do what we are told. Above all we will all have to endure this because otherwise our politicians and our media would have to admit the error they have made. It is perhaps the worst in our history and this is why we will have to continue making it.

This post was originally published by the author on her personal blog: https://www.effiedeans.com/2020/09/was-lockdown-needed.html

Effie Deans is a pro UK blogger who works at the University of Aberdeen. She spent many years living in Russia and the Soviet Union, but came home to Scotland so as to enjoy living in a multi-party democracy! When not occupied with Scottish politics she writes fiction and thinks about theology, philosophy and Russian literature.
Previous Why do so many British people hate Britain?
Next Tibetans moved to Concentration Camps, Uyghur Camps expanded.