What can be done about the BBC?

The BBC is trusted to provide an in-depth and unbiased account of the news.  Does it fulfill this brief?

National and Public Service Broadcasters use four main techniques to impose bias. The most frequent bias is the omission of news from one side of a debate so that it appears as if a particular view is obvious. Another technique is anecdotal reporting in which they use people like glove puppets, interviewing erudite academics on one side of an issue and fools on the other side. A subtler technique is to attach news summaries to current affairs programs so that news can be divided into factual news and suspect opinions.  The use of US news as if it applied to the UK is another method of hiding bias.

The BBC are the masters of subtle bias.  Why they are biased will be discussed later but here are some obvious recent examples:

Meghan and Harry – Dividing the Truth:  The BBC covered Meghan and Harry’s complaint that their children would not be princes and princesses on the news and then had a commentator discuss whether or not this was a valid complaint. Great grandchildren of the monarch are not given the title prince or princess, this is the normal process and should have been said on the news, not included as an opinion of a commentator on royal affairs. This method of using news broadcasts attached to current affairs programs to divide the news into “announced facts” and “facts delivered as opinions” is very sophisticated.

BLM – News Omission: The BBC omitted the actual rate of deaths of black people in police custody in the UK. In most years the rate is 1 or 0 and not due to police brutality.

Police brutality on arrest does occasionally happen in the UK but, given that there are almost one million arrests a year it is exceedingly rare.

Eliding UK and US News: A typical example is shown in the clip below.  The large number of police shootings in the US were discussed and then the UK seamlessly linked to the US position.

Fortunately the spokesman being interviewed spotted the “sleight of hand” and opposed it.  The actual figures for police shootings are shown in the graphic below:

The UK figures are so small they are scarcely visible on this illustration yet the BBC presenter gave the impression that the UK had similar problems to the US. The program above was also an example of news omission by failing to put the US, a foreign country, into a global context.

Trade – Anecdotal Reporting: The BBC reported the recent trade figures with the EU as a disaster.  In the context of overall UK-EU trading the figures were almost normal as can be seen from the graph below.  To obtain bias the BBC announced the figures for January as a change from the previous, highly anomalous, COVID affected months. 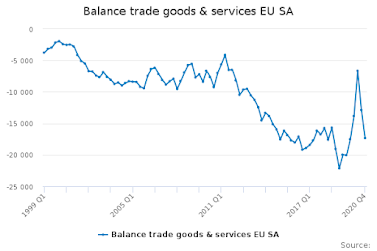 The Race Report – Anecdotal Reporting plus news suppression: The “Report by the Commission on Race and Ethnic Disparities” is a long document filled with interesting, real data on discrimination and racism.  The BBC omitted to report on its content and almost entirely relied on anecdotal comments by opponents of the Report.

As we have seen above, Britain is bad: it refuses to grant poor Harry and Meghan’s children princely status, its police kill black people all the time, its stupid lower classes voted for Brexit which has destroyed UK-EU trade, its government commissioned a race report that everyone says is a lie: and that is just in the past few months!  The only problem is that all of these claims are due to biased news reporting and false.

Anyone who follows the news from multiple sources will listen to any BBC News broadcast and spot the manipulation of every other item.  Why are they doing this when they have a corporate purpose that is supposed to impose impartiality?

The biggest clue about the motivation of the BBC staff is that, according to a member of the department that vetted BBC employees, it did not blacklist a single member of staff: “not one person was blacklisted after being screened in the 17 years that he worked for the company.” (Daily Mail).  This means that anyone with the right connections and a modicum of ability could join the BBC as an editor, producer or journalist.  This lack of vetting might seem to be a “good thing” but the BBC is a magnet for anyone with strong political convictions. Since the 1990s the vetting department has been discontinued.

In the 1930s & 1940s the BBC was heavily penetrated by Communists, even employing Guy Burgess, one of the Cambridge spies, and George Orwell, a self confessed communist at that time.  It also employed very large numbers of foreign journalists in the World Service.  Britain was a major power until the end of the 1950s and, like any superpower, gathered large numbers of enemies. The net effect of this mixture was to create an organisation that is anti-British.

Although some members of the BBC dream of revolution and others dream of “justice” for their country of origin and yet others look forward to global government (probably run by China) what they all agree upon is that Britain is bad.  This is the common thread in BBC bias.  They all agree that polarising society is the way forward to damage the nation.

Something must be done about the BBC.  The obvious course of action is to cut the BBC back to two broadcast channels and transfer BBC global operations to an entirely separate company “BBC Global”, run by the Foreign Office.  Having done this the Charter should explicitly include the following:

Regularly review the omission of news.

Recruit staff from across the political spectrum. Journalists and presenters should be recruited from the Times, Telegraph, Mail, Express etc. at well as from the Guardian and the Independent.

Where anecdotal reporting is used, whether by interview or by selection of data, it must be counterbalanced by fair coverage of the context of the reporting. The BBC currently selects interviewees to act like glove puppets for the views of its staff.

News broadcasts must be separate from current affairs programs and be self contained for the purpose of impartiality.

Coverage of important events and movements in other countries, especially in the USA, should be reported in a global context – for instance EU Racism, racism in the UK and genocide in China should be compared with US Racism.

The BBC should produce programming that promotes unity and enhances the national morale.  This would have been useful during COVID.

Campaigning should be forbidden.  The BBC must not campaign on any issue, even on issues that appear “good”.

It must not use any channel for 24 hour news.

The monitoring of BBC impartiality should be removed from Ofcom and given to an independent panel of reviewers, which would include people from all walks of life and exclude ex-BBC staff. It would have a small number of permanent investigators who would probe the omission of news etc. after each broadcast.

These changes should lead to a reduction in the license fee and stop valid claims of unfair competition from competitors. The changes will also lead to the BBC being highly regarded as a source or truthful news coverage.

The EU Referendum showed that the staff at the BBC had no respect for the Charter.  Whether we voted Remain or Leave the report by John Humphrys, a Remain voter, on the approach of the BBC to the Referendum should wake us up:  BBC staff betrayed its Charter and fully supported Remain.

The BBC continues to support the EU against an independent UK. It regularly interviews people such as Ken Clarke, Lord Adonis, Dominic Grieve, Peter Mandelson etc. on a range of issues.  These people are on the fringes of real power but at the core of the European Movement, a shady organisation dedicated to ending the independence of the UK.  The EU has common external policies on trade, security and foreign affairs which means that it appears as, and is, a single nation on the global stage.  From trade to the supply of vaccines the BBC is still campaigning for the EU.  Indeed the BBC gives the EU a complete free pass on matters such as Racism, emissions etc., omitting any news that might damage its reputation.  Supporting the EU against the UK means that the BBC staff are betraying our country as well as the Charter.

No country can have its National Broadcaster representing the interests of a foreign power.  Something must be done.  An emergency change of Charter is required.

This post was originally published by the author on his personal blog here.

Dr John Sydenham has worked in International Pharmaceuticals and for one of the "big four" International Consultancies. He ran a successful company for 15 years and after selling the company devotes his time to travel, science, black labradors and freedom.
Previous Decolonising the curriculum
Next Why do they only demonstrate when Jews are at war?