Who are the Fascists?

Who supported the Nazis?  In 1933 the Germans elected a coalition government with Hitler as Chancellor.  On page 3, right at the beginning of the first book that I turned to on the subject it says of the days immediately after Hitler’s appointment that the Lawyers Association sent congratulations saying it “welcomed the strengthening of national thought and will which had taken place in Germany”, the Secondary Teachers Association said that “There is no turning back..we endorse the new departure and want to contribute our share to help it succeed.” and engineers and professionals in general all cried out in support [1].

Teachers as a group were especially pro-Nazi.  It is often said that the teaching profession was purged of Jews and anti-Nazi factions but 97% of the profession joined the Nazi Teacher’s Association [2]. Teachers reported that although Jewish teachers disappeared no-one really noticed and across the professions “few long standing colleagues showed any solidarity” with the Jews [1].

Even more surprising for those who believe Nazism is a phenomenon that is lodged in the “crude”, lower classes the sociological studies show that Hitler’s support was strongest amongst the middle class. “Nazi party members were usually in employment; and unemployment was concentrated in those places where the Nazi vote was relatively low, such as Germany’s large cities.”[3].  In 1930s Germany it was not the terrible recession and unemployment that directly caused the rise of Hitler but a middle class who believed that they knew best.  A class that felt that democracy was less important than organising society ‘properly’. 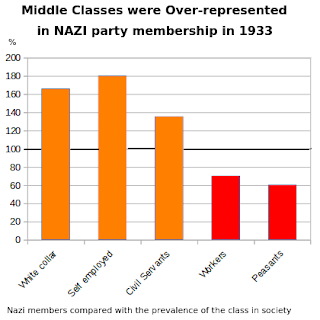 The other group in society that was especially pro-Nazi were the young.  Nazi membership was younger than that of other parties; the average age of those joining between 1925 and 1932 was slightly under twenty-nine.

Nazism was the choice of those who were educated and thought they knew best.

What actually happened in the 1930s that is echoed in modern events?

In 1930-32 Germany was in crisis with high unemployment, deflation (not inflation) and a society that was polarised between the middle and working classes.  On top of this “Separatist movements were rampant throughout the Rhineland and Bavaria…” [4]. In 1930 the Conservatives under Heinrich Bruning were leading a minority government that stopped the previous hyperinflation with a program of austerity measures. The Conservatives were unable to gain Parliamentary support for key measures and resorted to government by Presidential Decree.  The Conservatives called an election but this made matters worse with a Parliament that was yet more divided.  The population became increasingly frustrated with democracy.  The uncertainty caused by the failure of Parliament led to the Corporate Elite of industry switching their allegiance from the Conservatives to the Nazis. Curiously the electorate did not blame the Nazis for the Parliamentary gridlock but actually supported them in the 1932 election. This mixture of Corporate funding and growing electoral support failed to give the Nazis a working majority. The Conservatives then appointed Papen as leader but he was also thwarted by Parliament, they held another election in 1932 which yet again failed to get a Parliamentary majority. Papen was replaced by  Kurt von Schleicher who continued to govern by decree. An election was held in 1933 which led to a coalition government with Hitler becoming Chancellor. The rest is history.

The parallels between early 1930s Germany and the UK in 2016-2019 are disturbing. In the UK the recent austerity, polarisation of the classes, threatened breakup of the Union, a far left (Labour) and Communitarian (LibDem & SNP) opposition that put their ideals above the needs of the nation and the consequent Parliamentary gridlock are eerily similar.  In Germany the opposition parties (largely Communists and Nazis) were interested in power and did not care about democracy.  They played out their battle for power in Parliament by blocking the government at every turn.  When the constitution was invoked to allow government by decree it permitted the opposition to claim that the government was authoritarian and had no respect for democracy.

In principle Communitarianism, the belief that an individual is secondary to their role in society, need not lead to National Socialism but in practice it can slide that way all too easily.

Twentieth Century history shows that the source of National Socialism is Communitarianism [5,6].  We can spot the slide to National Socialism because “Ever since Aristotle distinguished between master and slave by asserting the former’s superior ability to recognize and comprehend  the  common  good,  there  has  been  no  shortage  of  potential rulers claiming a special insight into its nature and seeking to impose their exclusive conception of goodness or virtue on the social order.” [6]. Teachers and Lawyers cannot see why people won’t obey the rules which are obviously there for the common good.

We can see embryonic National Socialism in the recent utterances of the LibDems.  The clearest example is where they avow that they are the ones who know that the EU is essential for the common good and, being convinced of this, will prevent those whom they consider stupid or irresponsible from leaving, even if they are a majority.

Communitarians such as the public sector and corporate workers who populate the LibDems will deny any National Socialist leanings because they believe themselves to be “Internationalist” and are unaware that the first attempts at an EEC were made by the Axis powers in WWII (See Origins of the EU).  Like the Lawyers and Teachers of 1920s Germany, the Lib Dems support large scale migration but, like those Communitarian Germans before them who became racist in the 1930s, they are untroubled by supporting racist organisations – see EU racism is far worse than UK .

Are those who support leaving the EU like Nazis?  The Nazis supported an EEC but those who want independence do not. The support for Leaving the EU comes from an entirely different sector of society from that of the National Socialists. Extending the normal prorogue of Parliament at the end of a Session by a few days hardly represents the seizure of power by an authoritarian government. So what is the basis for the claim that the party that supports independence for the British is stepping in the footsteps of the Nazis?  The nearest parallel between the UK in 2019 and Germany in 1931 is between the UK Conservatives and the German Conservatives.

Dr John Sydenham has worked in International Pharmaceuticals and for one of the "big four" International Consultancies. He ran a successful company for 15 years and after selling the company devotes his time to travel, science, black labradors and freedom.
Previous Conservatives in Scotland need something different
Next Impartial Journalism in a Polarised World