Why Brexit will be fine – deal or no deal

Since the Referendum we can already see that wages are rising in real terms: 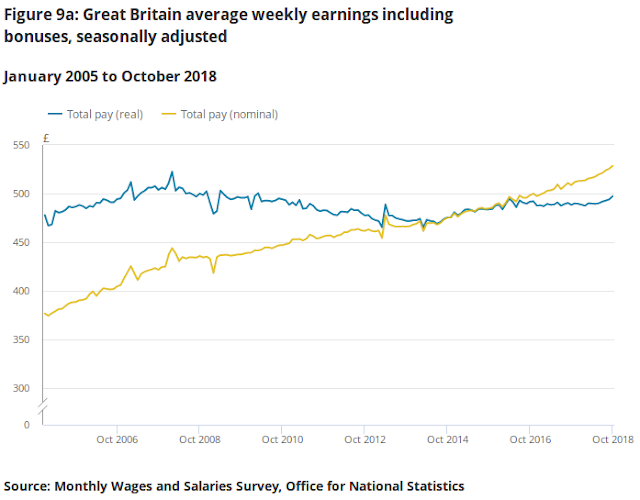 The Referendum has brought us the highest level of real earnings since November 2010. According to the BBC article Wage Rises Accelerate to the Fastest Pace since 2008:  ‘Howard Archer, chief economic adviser to the EY Item Club, said: “Current decent employment may be influenced by companies being keen to employ while they can, given the increased concern in some sectors over a lack of suitably skilled candidates. “In some cases this has been significantly influenced by fewer workers coming from the EU,” he said’.   As the BBC put it in September: Andrew Wishart, UK economist at Capital Markets, said the figures indicated that “competition for workers is finally starting to provide greater support to wages”.

Unemployment is at the lowest level since the 1970s: 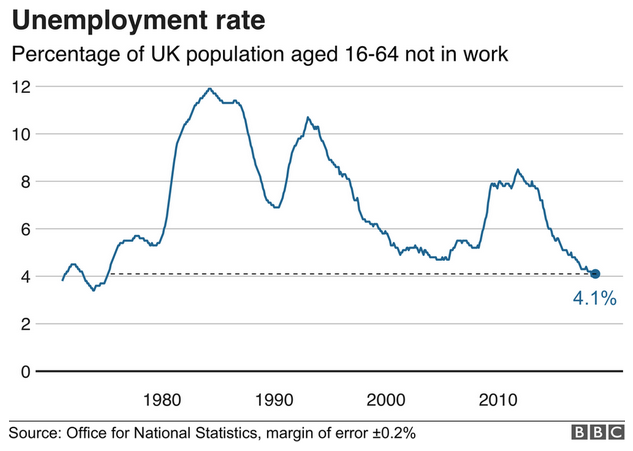 The Referendum has been very good for ordinary people.  Yet the Bank of England and Treasury says that it has been bad for the economy.  Why the difference?  The reason for the difference is that the Bank of England thinks that doubling the population is an excellent way to double the GDP.  Ordinary British people think this is an appalling idea, it destroys our countryside, puts a terrible strain on services, overcrowds us and changes the nature of the country.  All population growth in the UK is the result of migration and migration has fallen since the Referendum, less people means less GDP so the Bank thinks that the Referendum has had a “bad” effect.  You and I must think the referendum has had a good effect because wages are up and population pressure is down. 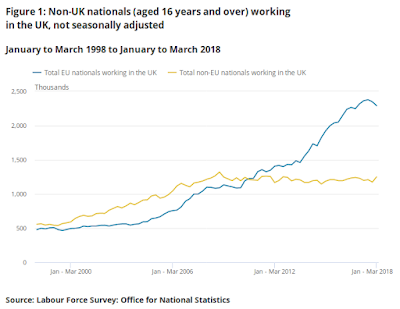 Who would believe that doubling the population is a great way to double GDP?  Multinational Corporations and International Banks believe this because they benefit from it.  We do not benefit and do not believe it. Brexit has resolved into a battle between the exploiters who would double the population to double GDP and the People.

Project Fear Mk1 reached a crescendo in June 2016 with a predicted 6% drop in GDP with £120bn lost in the first year after the referendum alone, this did not happen (See Note 1).  The latest Project Fear, Project Fear Mk2, also promises about £120bn loss in the first year after Brexit if the very worst possible assumptions for “no deal” Brexit occur.  The economic predictions are the same now as they were in 2016, with Remain saying £120bn loss and Leave saying “you are kidding”.  A large part of the Bank’s figures (about 50-60% over 5yrs) for the worst possible effects of a no-deal Brexit are due to the assumption that the population will slightly decrease due to a 350,000 pa decrease in migration.

The very worst possible assumptions will not happen because we have already seen that the EU will not let the derivatives markets collapse after a “no deal” Brexit.  Other scenarios such as huge congestion at ports are still easily avoidable with a little bit of planning so will be avoided – Calais dreams of duty free after Brexit.

A managed “no deal” Brexit will, according to the Bank’s own figures, have little effect on our personal wealth and only create headlines for National GDP: In fact individually our wealth grows strongly after 2020. See Bank of England gives green light to WTO scenario for a detailed analysis.

Now that we know so much more and realise that Brexit – leaving the EU fully – gives us little to fear we should just get on with it and stop all this absurd talk of second referendums. 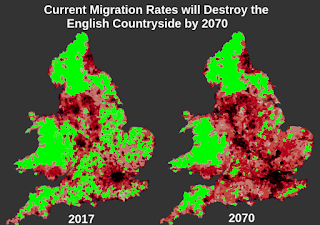 Postscript: The reflex response from the exploiters is to call this article racist.  How will we ever save the land or help our neighbours be more prosperous if we are forbidden from tackling the availability of labour and the level of population?  The exploiters own the media and are creating the perfect politics for their own enrichment at our expense.

And this is what they predicted: 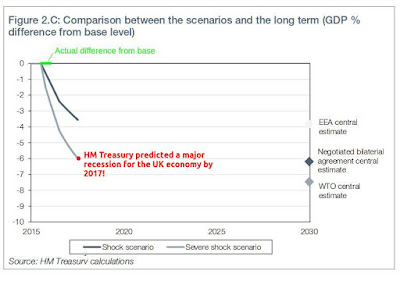 But it has not happened.

In fact the current predictions by the Treasury for after Brexit as late as November 2018 were fine before the government decided to repeat “Project Fear” to put people off a no-deal Brexit: 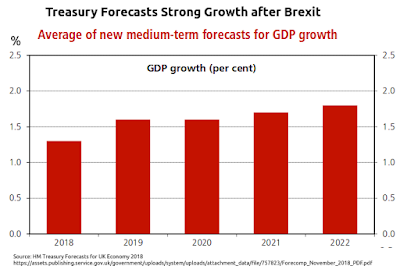 This post was originally published by the author on his personal blog: http://pol-check.blogspot.com/2018/12/why-bank-and-people-differ.html

Dr John Sydenham has worked in International Pharmaceuticals and for one of the "big four" International Consultancies. He ran a successful company for 15 years and after selling the company devotes his time to travel, science, black labradors and freedom.
Previous Discovered…common ground
Next The Many Lies of the Remain Campaign