Those who desire the people of Britain to Remain in the European Union often ask “Why do you support Brexit?”.  Here is the answer.

Diversity arises from borders.  Diverse economies exist where rules and regulations differ and diverse peoples and cultures exist where societies have developed separately.

The main reason for Brexit is to preserve diversity and so add stability and prosperity to the UK and Europe.  Europe has been prone to periodic attempts at turning it into a single empire or state and the most recent of these attempts have used the example of German Unification in the nineteenth century. 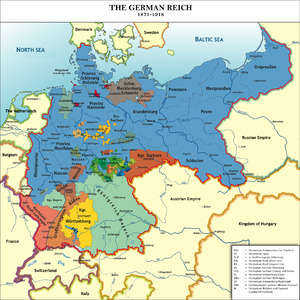 German Unification began with a customs union, economic community and open borders and ended with a single, homogeneous German State. German and French politicians and philosophers have seen this as a way of creating States ever since.  They attempted to create a European Economic Community from the Axis powers during WWII and persuaded the Americans that this was the way forward after the War.  We can see from the example of German Unification and from the obvious homogenisation within the EU that customs unions and economic communities are directed at creating a single, homogeneous State. In fact the architects of the EU are absolutely honest about the EU Treaties and declare the Euro etc. as the path to a single state.  It is only the British Remain lobby who say this is untrue.

The benefits of diversity are obvious, for instance sustainability requires borders.  In the absence of borders people and investment will flow to wherever there is a resource to be exploited.  They will consume this resource and then, eventually, many will move on leaving the rest of the people floundering in poor employment.  This is the locust model of human development.  It can be seen in regions of most developed countries where industries have expanded, damaged the land and moved on.  Massive overpopulation is a new threat to the land because the flow of people can now be so huge it will bury the land beneath cities and roads. 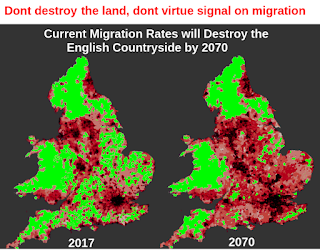 This mass movement of people is a special threat to England.

Many of those who oppose diversity accuse those who want borders of being Racist but such arguments about Brexit are a confusion about racism. The true racist would hates diversity to such a degree that they would want to destroy or breed out those who represent it.  The Nationalist racist might want to expel those who are different and the Internationalist desires to breed out or swamp difference.  Notice that all Internationalists are racists because they wittingly or unwittingly achieve a racist result.  Internationalists imagine they are anti-racist when they dream of a world where everyone is the same – but that is really the same dream as the Nationalist racist who imagines a country where everyone is the same.  Internationalism is not anti-racist, it is just a sanitised, middle class racism. This point is obvious and it is only because the Internationalists control the media and political parties that it is hidden.  Real anti-racism is about respect for diversity.  It starts with respecting a diversity of nations.

It is obvious to someone who looks over a busy harbour or across ripening cornfields that the economy is linked to the land. But locality does not just affect agricultural land.  It is less obvious that the British rules and regulations governing London markets underpin these markets, that the mass of theatres and the fluency of the English greatly assist the UK media etc. The urban population can easily imagine that Paris or Berlin are just cities like London but from tech startups to fashion there are huge differences due to local and national influences on London:

However, The Mobile Urban population are selfish. Those who move to cities for advancement leave their families and friends behind. They become detached from the land where they were raised.  This group of people construes income and status as the only measure of a good life.  A world without borders allows them to spread destruction. Where they are involved in culture it is to replace local culture with global culture, where they are involved with making money it is without sympathy for the people they exploit.  When they develop the land it is without regard to the landscape or wildlife.  The Mobile Urban population can be contained within a Nation but those who work for multi-national companies are now agitating for freedom from National constraints and desire the global acceptance of their way of regulating the economy and society.  This tension between the Mobile Urban population and the settled population of both town and country is the new battle line in global politics.  It is the battle between Internationalists and Nationalists.

It is Internationalism, the tearing up of borders, the suppression of Nation States and the elevation of Multinational Companies and Banks to governance that is the true threat to all of us.  It masquerades as anti-racist but is racist, it declares it is the only route to sustainability but measures all progress in terms of growth, it talks of a world of human rights but supports government by the EU Commission and global organisations that cannot be removed by any constitutional act of the People.

The International Order was intended as a means for easing relations between states, not as a replacement for nations so that we can be controlled by multi-national corporations.

The EU Referendum has exposed the sheer power of the Internationalists: huge American investment banks such as Goldman Sachs and JP Morgan financed Remain, the broadcast media is controlled by Internationalists and has embarked on endless anti-Brexit news coverage, even praising Hedge Fund owners for contesting Brexit in court.  JP Morgan, Virgin and George Soros have launched an all-out campaign on social media, on broadcast media and through financing street demonstrations and lobbying of Parliament to undo the referendum.

I believe that the settled population of our cities and country will successfully oppose the mobile, self-styled “elite” and ensure that the racist Internationalists are beaten.

This post was originally published by the author on his personal blog: http://pol-check.blogspot.co.uk/2017/08/why-brexit.html

Dr John Sydenham has worked in International Pharmaceuticals and for one of the "big four" International Consultancies. He ran a successful company for 15 years and after selling the company devotes his time to travel, science, black labradors and freedom.
Previous It’s not bad enough yet
Next Boris’s ideals on Brexit are inspiring. His bashers are jealous of him.