Why don’t the English want to be in the EU?

Without the Scots and Northern Irish the vote for Independence in the EU Referendum would have been overwhelming: If there were to be a Second Referendum on EU Membership, so breaking the “once in a generation” rule on referendums, the Scottish and Northern Irish should be given Independence Referendums first so that any doubt about whether they wish to be part of the UK is resolved.  It would be absurd for those who are leaving the UK to determine the future of the whole UK.

The most obvious reason that the English do not want to be in the EU is that England is culturally distinct from the rest of Europe as can be seen from the Inglehart–Welzel Cultural Map: 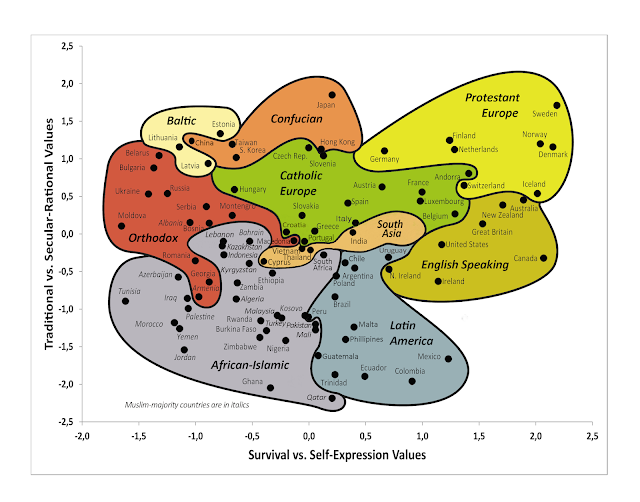 The Northern Irish are distinct from the English and, although not shown, we might suspect that the Scots are also distinct.

The huge difference between Great Britain and most of the EU lies in the importance of Individualism.  Much of the EU is Communitarian (corporatist – see Note 1) in that it’s people tend to believe that a human being is defined by their role in society.  The English tend to believe that an individual finds their own path in life and that this defines them.

When the Balkans were freed from Soviet domination they reverted to their pre-WWII cultural divisions, similarly the Russians have reverted to pre-Soviet models of society having dabbled in democracy.  Cultural roots cannot be easily discarded.  Now that the EU has been free from Anglo-American cultural and military domination for over 20 years it is also reverting to its Communitarian roots.  It is certain that most of those English people who support continuing membership of the EU as it moves towards a “United States of Europe” do not understand that its ultimate destiny is the National Socialism of Napoleon where racism is expressed as homogenisation rather than extermination (See for instance the economic analysis in The Origins of the EU).  Now that National Rally, 5 Star and other so-called “populist” movements in Europe have accepted the permanence of the EU we can expect a rapid fulfillment of its cultural destiny. It is not racist to accept that other countries can have different cultures and that the cultural diversity of humanity is wonderful.  It is racist to demand that we should all be the same. The English must leave.

Note 1: Those who believe sincerely that the UK should be part of the developing EU and become part of an EU state are usually serious corporatists.

This post was originally published by the author on his personal blog: http://pol-check.blogspot.com/2019/06/why-dont-english-want-to-be-in-eu.html

Dr John Sydenham has worked in International Pharmaceuticals and for one of the "big four" International Consultancies. He ran a successful company for 15 years and after selling the company devotes his time to travel, science, black labradors and freedom.
Previous Attacks on Journalists
Next An Indyref Romance: Harmony and Dissonance – Chapter 13