Why is UK Productivity not Growing?

The UK economy has been losing productivity relative to historical trends since 2008: 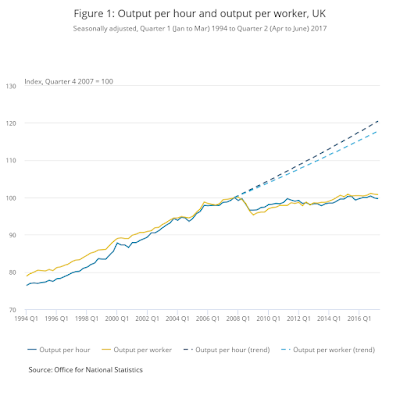 The fact that the fall in productivity after 2008 is exactly coincident with the banking crisis shows that it is related to the behaviour of banks.  Bank lending to business has been appalling in this period, the total loaned to small and medium sized enterprises decreased in every year from 2008 to mid 2015: 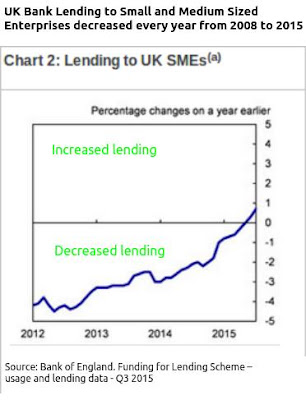 Curiously the UK imported a million EU workers from 2008 to 2015.  UK businesses seem to have turned to cheap labour because they were unable to invest in more productive methods: 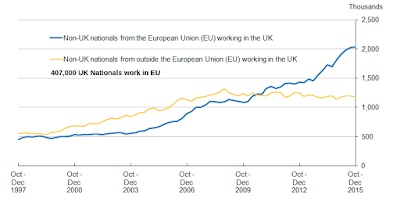 This use of cheap labour to increase output is crystal clear when the expansion of the workforce is compared with GDP figures: 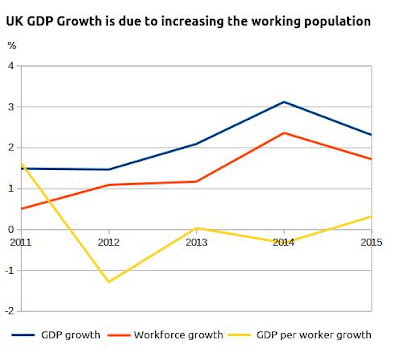 The failure to increase productivity is due to using cheap labour imported from overseas rather than investing in plant and automation.  Cheap labour is a short term method of maintaining and increasing profits: business owners and managers cannot be expected to invest now if that makes them much less competitive now.  The increased use of cheap labour boosts business profits in the short term.  It is for governments to care for the future of the economy by introducing policies that are good for the people in the long term.

The solution to the productivity problem is to increase bank lending to SMEs (at low interest rates) and reduce the availability of cheap labour – ie: Brexit.

To give Hammond, the current Chancellor, his due, at least he has highlighted the problem. Osborne and Carney have really let the UK down by failing to act.  However, subsidising loans to small business through government loan guarantees and obstructing the free movement of labour from the EU are not really feasible without Brexit.

This productivity fall is a part of the regionalisation of the UK economy in which investment occurs at the heart of the EU multinationals and labour flows are used to manage temporary rises in production as the economy subsides – see Regionalisation of UK Economy. Without leaving the Single Market the UK economy will decline steadily over decades.

This piece was originally published by the author on his personal blog: http://pol-check.blogspot.com/2017/11/why-is-uk-losing-productivity.html

Dr John Sydenham has worked in International Pharmaceuticals and for one of the "big four" International Consultancies. He ran a successful company for 15 years and after selling the company devotes his time to travel, science, black labradors and freedom.
Previous A Brief of the Zimbabwean Coup
Next Reflections of a former SJW