Why Trade Deficits Must be Avoided

I have just finished reading yet another article on how Trade Deficits are harmless or even good for a country (The Trade Deficit Matters, But Not How You Think by Jeffrey Dorfman). Trade deficits happen when a country imports more than it exports, the excess imports need to be purchased using loans.

The general thesis is that economists in the UK and USA have had the brilliant insight that buying imports on credit makes us all richer now and that there is nothing wrong in this.  German, Japanese and other economists who maintain that getting ever deeper in debt is simply wrong are thought to be stupid.

World economic history is full of examples of countries where persistent trade deficits have caused economic disaster.  In recent years Greece is a good example.  Yet in the USA and UK economists are queuing up to support the idea that trade deficits do not matter.  My favourite quote from the UK/USA economics stable is this about the USA:

“According to our static analysis, the main welfare cost of eliminating the current account deficit is simply the loss of the free lunch, i.e. the loss of goods that we currently consume but do not pay for until later. That cost is on the order of six percent of GDP.” UNBALANCED TRADE Robert Dekle et al

The paper should have been called “Let the kids pay” although, given the size of the UK and USA deficits over the past 10 years, we are those kids.

When trade deficits are huge like those of the USA and UK, and cause debt to pile up, the interest payments become very significant and start to become a major burden on the National Accounts even before the debts themselves have to be repaid. In the UK this debt burden has led to continuing Austerity (as it has in other EU countries with large trade deficits). 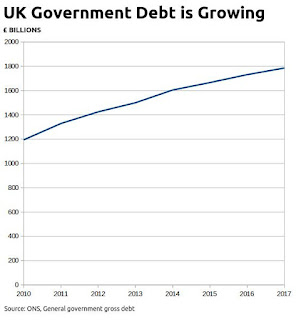 A popular myth about Trade Deficits is that money spent on imports is always recycled back into the domestic economy. Pounds or Dollars spent overseas must always find their way home. There is little doubt that this is approximately true but the loans given for that part of imports that create the trade deficit release goods, not money and are not even always in pounds and dollars. To simplify: if a German sells you a 30,000 Euro car and you pay using a loan agreement so that you owe the German 30,000 Euros, none of these Euros will cycle back into the UK economy.  Had you not required a loan and bought the car with £25,000 cash then that money would rapidly percolate back to the UK.  So it is approximately true to say that money spent on imports finds its way back home, the caveat being that the money spent on imports that create a trade deficit does not necessarily find its way back or does so very slowly.

Those who support Trade Deficits usually attempt to cloud the issue by saying International Trade and Imports are good and “mercantilism” is bad.  They ask inane questions like “do you want to stop trade?”. This is deliberate obfuscation because none of these points have much if anything to do with a Trade DEFICIT, which is getting into debt to pay for overseas purchases rather than earning the money from exports to pay for them.  No-one is saying “stop imports!”, what is being pointed out is that imports and exports should balance.

So economics journalists in the UK and USA have spread the myth that Trade Deficits do not matter and do not affect GDP.  The only groups that really benefit from this disinformation are international banks like Goldman Sachs that provide loans to support trade deficits, multinational companies, which depend on international trade, and China. Perhaps economics journalists in the US and UK are showing off in front of these potential patrons.

If you are still feeling confused and inclined to support anti-Brexit “experts” just contemplate what would happen after years of £40 bn trade deficit a year financed by loans, it is obvious that the economy would eventually have to break.  Ask the Greeks. The way the government stops the loans building up is Austerity but that makes the poor pay for the Trade Deficit. If you still think that  economists cannot be supporting something that is obviously wrong, ask yourself why we have a productive economy at all when we can supposedly just live on imports bought on credit? Just a moments reflection shows that Trade Deficits are obviously a bad idea.

The persistent US and UK trade deficits are so large (c. 2-4% of GDP per annum) and persistent that they constitute an attack on the poorer sectors of these countries by the governing and elite classes.  The Government and Corporate loan repayments created by the Trade Deficit mean that welfare and quality of  employment are restricted and Austerity becomes normal.  The elite are happy with this state of affairs.  In the UK the elite look to employment in the EU for security and in the US they move to States that are unaffected, in both countries the elite move to employment sectors that are not affected by the continual erosion of job quality and wages.

There is a school of thought in economics that one country’s trade deficit is another country’s trade surplus thus at the global level we should ignore trade deficits and focus entirely on trade volume. The theory is that, provided trade is growing, trade deficits may be of “aggregate benefit” to the world.  Those who adhere to the aggregate benefit justification of Trade Deficits should be aware that the world is a very large place and nowadays widely practices variants of Chinese Capitalism: Capitalism without democratic oversight or accountability.  Freedom is a more important aspiration than material wealth and by financing tyranny with the gift of trade surpluses we are risking our freedom.  The Chinese have accumulated enough wealth from their surpluses with the West to create a global empire. Of course, multinational corporations don’t care about this – so long as they have a capitalist market freedom is of no consequence.

Aggregate benefit thinking is actually out of date.  Mark Carney, in his Roscoe Lecture: The Spectre of Monetarism summarises the idea of aggregate benefit and its downside:

“Globally, since 1960, real per capita GDP has risen more than two and a half times, average incomes have begun to converge, and life expectancy has increased by nearly two decades. Despite such immense progress, many citizens in advanced economies are facing heightened uncertainty, lamenting a loss of control and losing trust in the system. To them, measures of aggregate progress bear little relation to their own experience. Rather than a new golden era, globalisation is associated with low wages, insecure employment, stateless corporations and striking inequalities”

Aggregate benefit supporters maintained that a small loss from wealthy countries was worthwhile because it lifted the prosperity of the whole globe. It may have had this effect but now, with the rise of China into a developed economy and with India close on its heels, much of the non-Western economy no longer needs the sacrifice of the US and UK poor for their prosperity and responsible US/UK governments should now seek to stop the adverse effects of Trade Deficits on their own people.

UK and US government economists who still practice “aggregate benefit” thinking to justify trade deficits must be brought to account.  A policy of inflicting debt on the US and UK so that other countries such as China can have a surplus is an important policy decision that cannot be left in the hands of ideologically motivated civil servants.

This post was originally published by the author on his personal blog: http://pol-check.blogspot.com/2018/07/why-trade-deficits-must-be-avoided.html

Dr John Sydenham has worked in International Pharmaceuticals and for one of the "big four" International Consultancies. He ran a successful company for 15 years and after selling the company devotes his time to travel, science, black labradors and freedom.
Previous Are the Conservatives the Party of the Rich?
Next Trump the usurper