Even the smallest garden can seem bigger with a cleverly placed path. 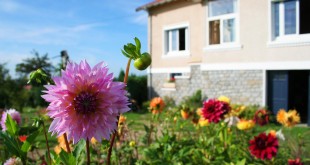 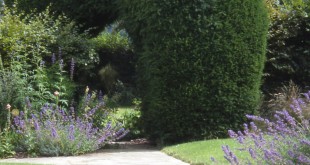 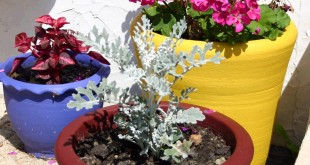 Magic is all about illusion. When it comes to making a small space look larger, there are loads of ideas to trick the eye into a fooled sense of space.

Gardening for small spaces borrows many tricks of the trade from interior design and the world of art, both of which can teach us a thing or two about placement and perspective.

One of the first important concepts to understand is the effect of colour on the eye. Artists and interior designers know that cool colours such as blues, soft pinks and white appear to recede from the eye. Blue in particular, mimics the bluish tint that atmospheric haze gives to distant objects. Plant the perimeter of the garden in cool colours and it will look larger.

Hot colours including reds, oranges and bright yellows have the opposite effect. They jump out at the eye and are useful for lending intimacy to too-large spaces, but should be avoided in small spaces. Any bright colour, even white, will appear to close in a garden space. For example, a pergola painted white will look closer than one painted in natural tones.

Painting fences soft colours or muted greens as opposed to Moroccan orange or brilliant red will make the perception of your boundaries recede away from you and make your garden look bigger.

It was the Renaissance artists who discovered the illusion of depth through perspective by copying the way in which natural scenes seem to recede to a single point. A skillful gardener can use this knowledge to force the perspective, that is, to make a landscape seem to have more depth than it actually does.

You can, for example, run a path straight back through the centre of the garden, staking it out so that the path gradually narrows as it approaches the back fence. The viewer’s eye will assume that the width of the path is uniform and that the edges seem to draw together because the path is receding into the distance.

Similarly, if you clip a hedge so that it diminishes in height and width at a uniform rate as it draws away from the viewer, it will seem much longer than it actually is. Echoing the plantings near to the house with similar but markedly smaller ones along the back fence also creates an exaggerated illusion of depth.

Overplanting is one quick way to make a garden look smaller. Be conservative with plants. Choose reliable plants with soft muted colours, fine textures and those that blend with surrounded gardens for that borrowed landscape effect.

The French expression trompe i’oeil means fool the eye. In its simplest form, this technique involves the use of a full-length mirror to give an illusion of depth to an enclosing wall or fence. Conceal the mirror it at the end of a path and at a slight angle to the wall or fence so that when you look into it, you don’t see a reflection of yourself, which would destroy the illusion.

Eyes can be deceived by texture. Fine texture is hard for the eyes to focus on at a distance. The illusion created is that fine textures appear out of focus and therefore a perception of space is produced. In contrast, by placing large bold textured items close, other items behind it will look further away.

As with home interiors, simplifying and removing clutter around the garden and outdoor living spaces will make them appear more spacious.

Previous Vodka with a measure of class
Next Where there’s a will, there’s a way 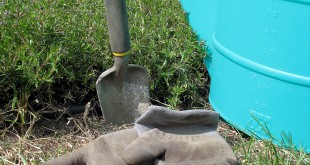