Recently, I’ve read several articles about the political views young adults of the UK. I was encouraged to see that there support for the Conservative party has doubled in the past 8 years. However, what I am most happy about is that free market views have become the dominant viewpoint among young people. Boris Johnson, the most popular leader. From a personal standpoint, I wrote my senior thesis (in 2010) on exactly this change we are seeing. It was called from Bowlers and Spikes to Beckham & Spice: A History of Thatcherism’s Affect on British Culture. The below quote from an economist story backs up what I thought we would see.

“More than two-thirds of people born before 1939 consider the welfare state “one of Britain’s proudest achievements”. Less than one-third of those born after 1979 say the same. According to the BSA, members of Generation Y are not just half as likely as older people to consider it the state’s responsibility to cover the costs of residential care in old age. They are also more likely to take such a hard-hearted view than were members of the famously jaded Generation X (born between 1966 and 1979) at the same stage of life. 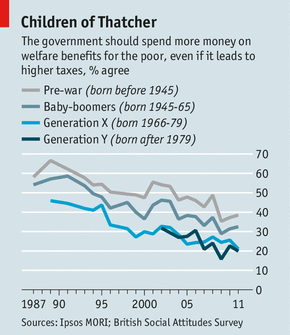 “Every successive generation is less collectivist than the last,” says Ben Page of Ipsos MORI, a pollster. All age groups are becoming more socially and economically liberal. But the young are ahead of the general trend. They have a more sceptical view of state transfers, even allowing for the general shift in attitudes (see first chart).

Polling by YouGov shows that those aged 18 to 24 are also more likely than older people to consider social problems the responsibility of individuals rather than government. They are deficit hawks (see second chart). They care about the environment, but are also keen on commerce: more supportive of the privatisation of utilities, more likely to reject government attempts to ban branding on cigarette packets and more likely to agree that Tesco, Britain’s supermarket giant, “has only become so large by offering customers what they want”.

This is not to say I think that I am joyous about the future of Britain. I think the change in Thatcherism & subsequently British culture, towards libertarianism has its drawbacks, & often times those drawbacks are severe. I believe the lack of any religion among many younger Britons to be very sad. Britons not being particularly religious is something that has been the trend since at least the end of World War I, it’s nothing new. But if the young people of Britain have no moral compass, a Britain led by them might lose many of its traditions and beautiful natural kindness and politeness of its culture that has made Britain great. However, I see the trend as more positive than what I see in America where most young people (although there are a large Ron Paul supporting libertarian faction among us) are extremely supportive of the Democrat party.

What do you think Britons? Are you encouraged or discouraged with the views of younger Britons? By the way, in case anybody thinks I’m not telling the truth about my thesis, just ask for it & I will email it to you. It’s 45 pages, (& too large to post in this blog) but if somebody would has the time or patience to read it, I’d love some feedback.

Ted is the co-founder and editor of the Daily Globe. He is a long-time blogger on British politics and has written a thesis on Thatcherism.
Previous A Step in the Right Direction
Next How do you solve a problem like an unemployed youth?