Well, the EU machine defeated Greece. Tsipras thought he had “taken it to” the Germans and their Benelux friends in Brussels when the Greek people rejected their bailout terms. Then he came right back on bended knees for more money and accepted an even harsher bailout plan. The undemocratic and unaccountable EU blob has a habit of defying democracy, ask Ireland. Why the Greeks wanted so desperately to hang onto the currency of the euro that has contributed to the destruction of their economy is mind boggling. I’ve almost come to the conclusion the EU is a cult and the euro is the one ring of the Lord of the Rings.

If one takes a more cynical view of the Germans of the 21st century, one couldn’t help thinking they did a fantastic job of taking over Europe. To break it down in 7 steps how they seemingly created
this empire:

3) They created a fake new patriotism that has never existed “Europeanism” to create loyalty to the organisation. (The EU’s anthem was even written by a German, Beethoven- Ode to Joy).

4) They imposed on these countries cuts that will make these public-sector debt based economies never grow again in order to “pay back” the original debts.

6) Even when they voted against the EU, they force these little countries elected representatives to give into even harsher demands than what the people rejected and had them sell off state assets to the EU. (To a fund based in Luxembourg actually).

7) They did this with no army but only a “patriotism” to the very currency that is keeping these countries poor. They did this to the “PIIGS”  (Portugal, Italy, Ireland, Greece and Spain) nations starting with Greece and spreading to the other near bankrupt countries. They have already bailed out the other PIIGS nations, and those funds will eventually dry up. Furthermore, come the next global downturn, which other non-advanced eurozone nation will have to give up sovereignty in order to get bail out funds? (Beyond the normal already sovereignty defying EU rules). Estonia, Lithuania, Latvia, Slovenia, Slovakia, Cyprus…how long until they have bank accounts frozen as well? Furthermore, France too is not in great economic shape, maybe France will have to be bailed out itself.

The euro currency makes no sense unless you are either from Germany or Benelux nation (and possibly Finland). For them, it is an artificially low currency. But for the other nations, it makes them much less competitive and gives them an artificially high currency. In the eurozone area, youth unemployment averages over 20%; in Greece, Spain, and Italy, the number is over 40%. The eurozone is the only area in the world not to recover from the financial crash, and the continent continues to decline in economic importance, as Daniel Hannan brilliantly points out. Under the EU, a country cannot makes its own trade deals, under the euro a nation cannot even determine its own fiscal policy. Are you a Libertarian, Socialist, Keynesian, Classic Liberal, Monetarist or Communist in a Eurozone Parliament? Well guess what? It does not matter at all, because you have to follow what the EU and ECB tell you to do.

Logically, none of this European project makes any sense. Why would you be patriotic to a continent of extremely different languages, cultures, histories, and peoples? Why would you want a currency so badly you are ok with giving up your own national sovereignty and any prospect of economic growth? Ultimately, I think there is a chance that the European Union might end up breaking the long established peace in Europe. (Some would say it already has in Ukraine, but I am not sure what to think of that theory).

Already, the EU is shaking up its more harshly effected members political systems. We have already seen the rise of Syrizia on the left and Golden Dawn on the right in Greece, but a similar situation is already occurring in the other PIIGS nations. In France, the National Front is now a mainstream party. In Ireland, the Sinn Fein, the party associated with the IRA, might win the next election. In Spain, far left Podemos might win power next election, and in Italy the leftist Five Star Movement is the second largest party. These are all parties that traditionally did not exist or were on the political fringes. But as we saw in Greece, even the ideologues are capable of submission to the will of the EU. What will the people do if they no longer believe in the democratic process? (Which they arguably shouldn’t). They might resort to violence.

Mass unemployment, a bad economy, and a disbelief in an economic system, is historically a recipe for the dry powder that ferments violence. The EU is playing with fire when it uses the EU to beat down these countries. Punishing people never works, and Germany should know better. After World War I, Germany was punished with paying for severe debts and we got the Nazis and World War II. After World War II, the still crash-strapped victorious allies forgave Germany’s war debts. West Germany boomed into being the largest economy in Europe. The Germans and the other EU bureaucrats need to understand that people can only be lorded over and oppressed for so long, 1848 can happen again. Eventually, the shine will come off the euro and there will be no European patriotism. They must see this.

If I was Germany, Finland and the Benelux nations I would move to expel the PIIGS, Eastern European nations, and France from the Euro. This would allow them to recover on their own, like Iceland did. From there they should negotiate with sovereign nations about some debt forgiveness and some repayment. As it stands, Europe is economically stagnate, increasingly undemocratic, and might become dangerous. The Europeans need to wake up and reform before things get really bad.

In Britain, the PM needs to see Europe for what it is, a trading partner. Be thankful the UK stayed out of the Euro too.  No longer does Britain do the majority of its trading with Europe, and as I have written extensively on before, the rest of the world and the Commonwealth provide boundless new trading opportunities. Britain is fortunate to have a good economy, but Europe is a basket case, and a basket case that lies about not spending your money at that. The UK has an economy that is leading the G7 in growth, it needs to cut its political ties with the continent in the upcoming referendum to avoid being dragged down by it.

Ted is the co-founder and editor of the Daily Globe. He is a long-time blogger on British politics and has written a thesis on Thatcherism.
Previous Murdoch’s Shame
Next The new Old Labour leadership contest 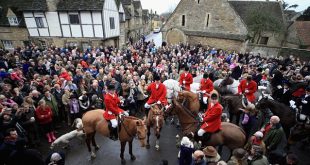