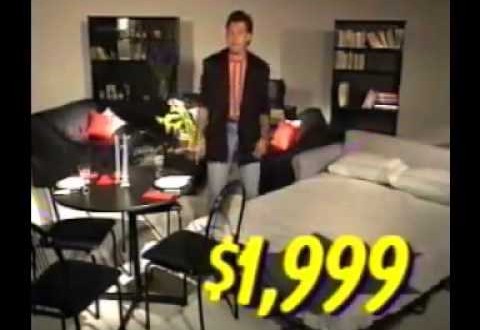 The Man Who Loved Discount Furniture Too Much

I guess most would say show business runs in our family.

For the better part of three decades, my Uncle Pat starred in those ever-popular “Super Discount Furniture Warehouse” commercials–the ones where the prices were so low, Pat’d lose his mind and start screaming and shooting his gun in the air and smashing windows with a sledge hammer.

Sure, the family was proud of him, but he had a bad habit of taking his work home with him. Once Aunt Edith made a potato casserole so good, Pat set the house on fire. No one was hurt and the house sustained minimal damage, but the same couldn’t be said for his career. The big wigs in charge of regional discount furniture warehouse commercials encourage such potentially destructive enthusiasm only when the cameras are rolling and they stand to profit, the curs.

A few weeks later, Pat’s ads were pulled in favor of a new campaign. It was basically the same idea, only instead of Pat firing a gun and yelling incoherently in front of a display of bay windows and kitchen sets, it was a young hotshot named Wallace Cotchfield.

Having fired Pat just days before, and captivated by Cotchfield’s portrayal of Falstaff–particularly how, in a wild departure from more traditional productions, the character was always running around, yelling incoherently and firing a rifle in the air–he offered the wunderkind Pat’s old job on the spot.

Now, I’ve swallowed a bitter pill or two in my day, but none more bitter than the fact that the kid was good. He was damn good.

We never mentioned Cotchfield to Pat and when a “Super Discount Furniture Warehouse” commercial would come on TV, we’d scramble to change the channel, so Pat wouldn’t see the truth–that from his loss, the world gained a masterpiece of a discount furniture commercial. Cotchfield had turned the character referred to as “Furniture-Crazed Maniac” in the scripts into a three-dimensional dynamo. His rifle firing was at once polished and raw, his window smashing thoughtful yet brutal.

Sometimes late at night, we’d be shaken from our beds by the unmistakeable crack of rifle fire to find Pat standing in the front yard in a bathrobe, gun in one hand, beer in the other, raving about a great deal on laminate flooring.

This was the first sign of Pat’s descent from fun, furniture-selling mania to just plain old mania. We thought we had lost him forever, though no one said it, and we sure as hell didn’t know what to do.

Then, early the next year, a knock at the door.

I could recognize him through the frosted front door window (just $19.99, Labor Day, 1998). It was Cotchfield.

“Can I help you?” I said, confused and a little starstruck.

We found Pat in the garage, looking at his old sledgehammer wistfully.

“Yes, well. I just came by to tell you I’m leaving for Hollywood tomorrow. Going to be smashing windows and yelling incoherently on the silver screen, it seems.”

“Good for you, kid,” Pat said, turning back to his sledgehammer.

“Look, before I left town, I wanted to tell you what an inspiration you’ve been. I learned everything from you. The hammer swinging, the rifle firing. The difference between a sale that requires a hammer and one that requires a firearm. It’s been an honor, sir. Thank you for all you’ve done.”

Pat nodded in gratitude but didn’t say anything.

Still, something about the way he picked up his sledgehammer and smashed the windshield of the old Plymouth let me know his spirits had been lifted, that this old madman was going to be alright.

And he was. Until the next week when, rifle in hand, he was shot to death while trying to tell a police officer about a huge price reduction on sliding glass doors.

The post was origninally published by the author on his personal blog on 9 January 2014 http://scottscrisps.tumblr.com/day/2014/01/09

Scott Crisp is a writer and comedian from Dallas, TX. You can follow him on Twitter @scott_m_crisp.
Previous Letters to ISIS from a confused UK Socialist
Next Two Supreme Laws